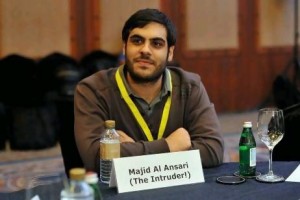 The young Emirati filmmaker Majid Al Ansari picked up a Golden Palm award at this year’s Mexico International Film Festival for his debut film, The Intruder!, a curious B-movie-style sci-fi short about a couple who encounter an alien robot on a lonely desert road.

Is this the first award for The Intruder!?

We got an honourable mention at the Boston Sci-Fi Film Festival and an excellence award at Puerto Rico’s Rincon International Film Festival. We’ve now been in 13 festivals.

It premiered at the Dubai International Film Festival last year. Do you think audiences are less accepting of sci-fi here?

The film is a bit out of the box and because the culture of filmmaking is very new it was much harder for audiences here. Some people liked it but the majority didn’t. It’s just going to make me work harder. After all, I’m an Emirati filmmaker and I hope to make something that will relate here.

What was the idea behind The Intruder!?

I’m a huge B-movie fan. Everything that we did was in the style of Roger Corman. But the story was actually a recreation of an episode of The Twilight Zone.

How did you put it together?

It took about two months of pre-production as we had to build everything out of scrap. The spaceship was made out of Ikea stuff and cost around Dh600. The robot is Robby the Robot, a sci-fi icon. The film was made for less than US$10,000 [Dh36,700], but had support from Image Nation [owned by Abu Dhabi Media Company, which owns The National], Filmworks and Filmquip Media. The crew were the same as those behind Sea Shadow and Djinn.

What’s next for you?

I’m now working full-time for Image Nation. In a year’s time, when I’m ready, perhaps I’ll have something new to bring to the table. But there’s still a lot for me to learn. I’ve still got a long way to go.