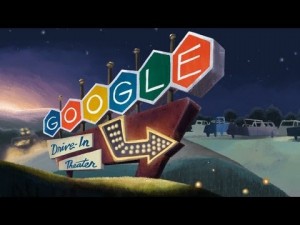 Several weeks ago, we ran a report that John Carter, which died a horrible death at the box office, got a little boost with some help from The Avengers.

Yes, it seems as if the movies were played on a double bill at a drive-in, and the tons of money The Avengers pulled in also generated a few bucks for Carter as well. Wait a minute… Drive-in?! Double bill?! What decade is this, again?!

Being a big fan of B movies from back in the day, I grew up reading all about the drive-ins. There’s very few of them left today, in fact, until the report about the Avengers / John Carter double bill came in, I had no idea any of them were left at all. But Mountain View recently ran a “Google Doodle” in celebration of the drive-in, which had quite a good run until the late eighties.

Back in the fifties when low budget B movie companies like American International Pictures were getting started, it was hard to compete with the major studios, so they started booking their movies at the drive-ins. Teenagers coming of age who were just starting to drive would bring their dates, and they would make out the whole time, so it didn’t matter how terrible the movies were. And where companies like AIP had a big advantage over the majors was by 1958 there were 4.063 drive-in screens, and companies such as AIP were making two to three times the money playing drive-ins than the regular theaters.

Still, going to a drive-in with either your date, or with your family, was a fun experience. It also taught filmmakers a lot about how to make an effective film. As Sam Raimi recalled in the New York Times, he went to the drive-ins to research low budget horror films before making Evil Dead, and you could see two movies for two bucks a night. When the audience didn’t like the film, they’d honk their horns, or white out the screen with their headlights, which taught Raimi what to avoid when making his own movies. Watching drive-in movies, Raimi knew he could do something better, and sure enough, he did.

Around the country they still do all night drive-in horror thons, which are great fun to attend, and bring back lots of memories for those who grew up in the drive-in era.   Back in 1995, the L.A. Times reported on one drive-in that was still in operation in California, and the woman who managed it recalled, “It’s nice in a rainstorm. You see the lightning off in the distance. I sure wouldn’t want to be working in a walk-in [theater]. No fresh air.”