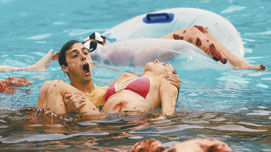 Cinematic regret. We’ve all had it. It’s that awful feeling awash of a truly heinous movie-going experience—90 minutes of wasted life. The more you think about it, the more angry you get—not at the movie, but at yourself for being stupid enough to be roped into seeing something that anyone with an ounce of common sense should have known would be terrible. Last week, said phenomenon came from the locally filmed and truly terrible “Piranha 3DD.”
I don’t completely regret seeing “Piranha 3DD,” mainly because being awful seemed less of an accident and more of a destination. It’s a film that wears its horrible pedigree across its scantily clad and/or exposed bosom with a kind of dullard’s pride—like the student who celebrates a D-minus after thinking he failed his midterm. Trust me when I say: “Piranha 3DD” is nothing to celebrate. David Hasselhoff sums it up rather ironically with the line “welcome to rock bottom.” David, rock bottom called and is threatening legal action over slandering its reputation.

Maddy runs into some old friends and provides the film with a bunch of really good looking people to be horribly murdered by the mutant piranha that begins to terrorize their town. Every character is right out of the B-movie handbook. There’s Kyle (Chris Zylka), Maddy’s old boyfriend and graduate of the Derek Zoolander School for Modeling; the nerdy Barry (Matt Bush), who pines for Maddy and is conveniently a marine biologist; and a few super-hot girls who exist for no other purpose than to provide erections and die.

There’s a few good moments in “Piranha 3DD,” mostly provided by a self-loathing Hasselhoff. His limited screentime is pretty damn funny, and it’s amazing that it is limited since director John Gulager (“Feast”) seems almost incapable of knowing when less is more. “Piranha 3DD” is an exercise in excess. Again, I am not surprised. That was the goal of “Piranha 3DD.” But goals are funny things: Just because you set out to do something doesn’t mean you should.

For example, I could set a goal to go to a retirement community and pull the fire alarm. Then, I could run down the halls screaming “We’re all going to die!” Then, I could wrap chains around the doors so that no one gets out and watch as panic sets in. It doesn’t even seem that difficult. All I’d need is a retirement community, several feet of chain and a complete lack of moral righteousness. Much like “Piranha 3DD,” this is a goal that does not warrant achievement.

In his reckless abandon, Gulager has created a piece of shiny garbage that seems almost desperate to make audience’s laugh or gross them out. While desperation can produce the occasional miracle, more often than not it leads to awkward silence—moments like watching a fish swim into a hot girl’s vagina or watching that fish bite a guy’s dick mid-coitus before the guy runs all over, freaking out, trying to figure out how to remove a mutated killer fish from his penis. It’s ridiculous and gross. Folks will either nervously laugh or just sit there in puzzlement, trying to figure out just why they’re watching this unfold. “Piranha 3DD” contains a hundred of those moments.

I expect there will be cries from B-movie junkies, “You just don’t get it, man.” Trust me, I get it. I just didn’t like what I got.

What is interesting about “Piranha 3DD” is the new release model being employed as more and more films are seeing limited theatrical releases with simultaneous availability via OnDemand. I don’t know how much more or less I would have liked the movie had I seen it at one of the 70 theaters that screened it. At home, on my television, not having to deal with $10 tickets and overpriced snacks, it didn’t feel as painful. There are movies I have to see on the big screen, like “The Avengers” and the forthcoming “The Dark Knight Rises.” For the smaller movies that can’t compete in a $200 million budget marketplace, limited releases and On Demand is the future. Hopefully, it also will contain more tolerable flicks than “Piranha 3DD.”