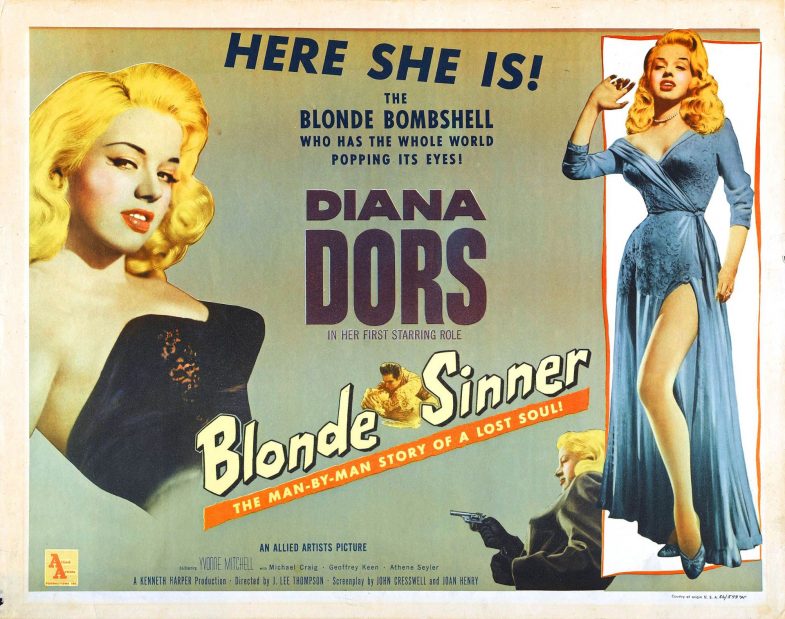 Diana Dors in her first dramatic role, and last before her unsuccessful venture into Hollywood, sees her trade in her glamorous image for a more realistic and down to earth performance as a woman who finds herself on death row after committing a crime of passion. The film, based on a John Henry novel, has obvious similarities to the real life drama of Ruth Ellis, who murdered her ex-lover on a busy London street and become the last British woman to be hung a year before this film was made.

Dors had become one of the more famous starlets to emerge in Britain’s post-war attempt at a Hollywood-like star system. Her familiarity with British audiences no doubt ensured sympathy for her character, which played partly on her bad-girl image. However, this was more than a mere star vehicle, and it saw her transform herself from a star to a serious actress. The American distributors seemed to miss the point somewhat, titling the film on its release there, ‘Blonde Sinner’.

The film obviously draws upon the controversial issue of capital punishment. There is no doubt that, despite us witnessing her murder in cold blood, our sympathies are meant to lie with Dors’ character. This is of course partly due to her star persona but also because of the way in which the film is directed. Rarely do we see the face of her victim who we learn nothing of apart from his cold attitude towards her ex-lover, Michael Craig, whom Dors has shown nothing but compassion for. Her callous attitude towards his tragic New Years eve suicide is exemplary of this, when she shrugs him off as someone who had just been a nuisance to her.

However, the film is commendable in that manages to avoid mere melodrama. We don’t just get a one-sided view of events. We are left in no doubt that the Dors character is herself an adultress who committed a murder with malice and forethought. The issue the film achieves in getting across is the detrimental effect the capital punishment system has on those who are around it. Not only do we see the effect it has on Dors’ family but also we get an insight of the wardesses who are with her for her final days. In particular we recognise the discipline shown by Yvonne Mitchell’s character, Macfarlane, a young wardess who is drawn with compassion and sympathy towards Dors, and yet must contain her emotions especially during the last agonisingly pensive hours. There is also a feeling that we should not be overly sympathetic towards Dors, as she is rebuked by an elderly Christian lady that visits her for being too self-pitying and for showing little or no remorse. This theme is of course drawn on in more detail in Tim Robbins’ recent death row drama ‘Dead Man Walking’.

J. Lee Thompson’s taut direction shows signs of his later atmospheric Stateside successes such as ‘Cape Fear’. The expressionistic filming techniques used to add to the claustrophobic tension of the prison cell scenes are particularly effective. Yvonne Mitchell provides a strong supporting role as the young wardess who befriends Dors. However, it is Dors herself who should be applauded most of all for her emotional and naturalistic performance as the woman awaiting her fate. Some of the film’s themes may seem rather cliched to a modern audience but I would imagine it hit a nerve when the issue was at the forethought of the British consciousness.