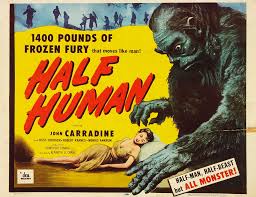 Toho got drunk with stupidity and Inoshiro Honda suffered for it. Toho got a worldwide hit when 20 minutes of inserts featuring Raymond Burr were added to “Gojira” and retitled as “Godzilla, King of the Monsters.” Unfortunately, studio execs overlooked the fact that it was Burr’s superior acting and stark narration that got the attention. They added inserts of American actor Myron Healey to Honda’s “Varan, the Unbelievable” and it tanked. They did the same to “Half Human,” giving rights to an American producer who added boring clips of John Carradine and Forrest Tucker (“F-Troop”). The library music-style score for the American insert clashed horribly with the original score and Carradine’s narration seems out of place since he appears in absolutely no scenes in Japan.

Sadly, after the utter disaster of this flick, Toho took the negatives of the original and locked them away. Even though “Gojira” and “Varan” have made it to American television, albeit only once, in their original forms, this film is still not available to the public.