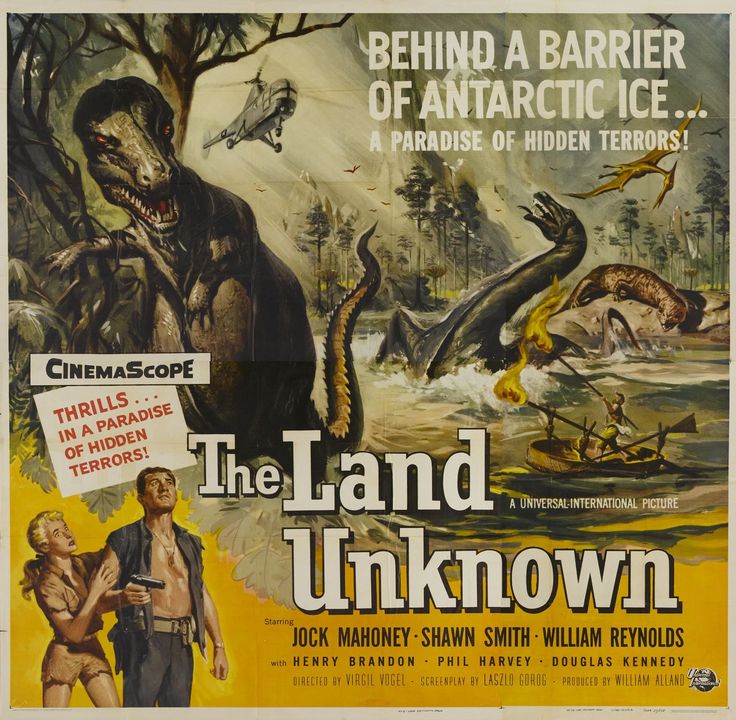 This rip-roaring sci-fi adventure scores high marks in several categories. The story concerns four people whose helicopter lands in an unknown prehistoric valley, a freak temperate zone located thousands of feet below sea level in the Antarctic, kept warm by volcanically-heated water and a permanent cloud layer that traps the warm air.

The special effects are by Universal’s FX wizard Clifford Stine, and even though the dinosaurs are not animated, they aren’t badly done. The Tyrannosaurus Rex is a man in a suit, the flippered dinosaur is fairly convincing puppet, and the rest are enlarged lizards. All the dinosaurs are skillfully integrated with live action shots.

In some ways, this is the perfect 1950’s sci-fi film, because it proudly presents a wealth of facts about the Antarctic before it begins its fanciful story.

The music by Joseph Gershenson is extremely effective. Director Virgil Vogel (“The Mole People”) keeps the action moving right along. Hero Jock Mahoney (who later played Tarzan) is a stalwart hero, and Shawn Smith (the stern lady astronaut in “It! The Terror from Beyond Space” and the luscious babe in a mini-skirt in “World Without End”) makes a gorgeous heroine