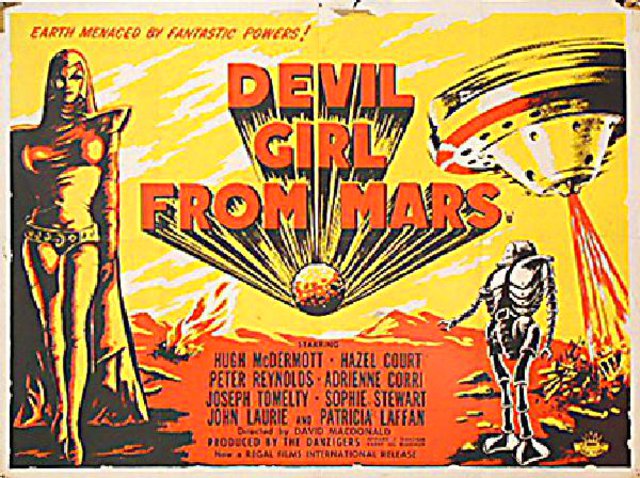 There’s no other movie quite like Devil Girl from Mars. It’s cheesy and low-budget, unfolding like a stage-play ineptly filmed, with a script dulled by timid ideas and old-school misogyny. Yet in Patricia Laffan, the British actress who plays Nyah the Devil Girl, this picture presents a space-queen unrivaled in the annals of B-movie campiness. Her dominatrix boots and patent-leather cape, not to mention her highbrow imperious accent, easily outclass the features on display from those Venusian babes in Queen of Outer Space (1958) or the Martianettes in Flight to Mars (1951). And check out that Devil Girl headgear, a cross between medieval helmet and Egyptian sphinx! In silhouette, Nyah is the image of Darth Vader, striding about with cape swirling to do something unspeakably naughty. But before you conclude that Ms. Laffan’s over-the-top performance is an instance of bad acting, consider this: there’s no way to play a character like Nyah with psychological depth. The Devil Girl is a comic-book villainess, an icon, somebody who has to be bigger than big. Patricia Laffan is the perfect drama queen to meet the challenge. If you like her in this movie, be sure to see her in Quo Vadis? (1951), a glorious sword and sandal epic that also features the burning of Rome and the martyrdom of the Christians. In that film Laffan plays Poppaea, wicked Empress of Rome, opposite Peter Ustinov’s even more formidable Emperor Nero. From bride of the Roman Antichrist to warrior-woman of Mars is just a small step — or should I say, it’s a small step for Patricia Laffan, but a giant leap for anyone else.