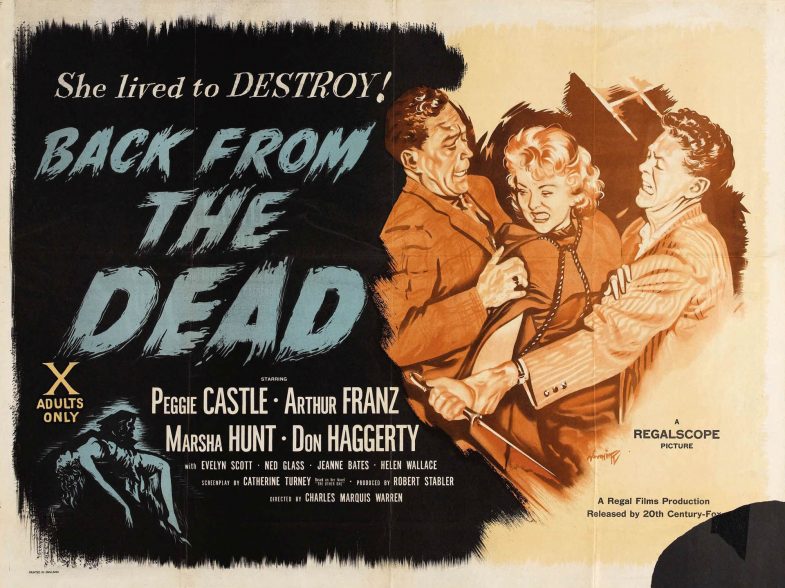 Having lost his first wife, “Felicia” (Peggy Castle) in a tragic drowning accident 6 years earlier “Dick Anthony” (Don Haggerty) has recently remarried. However, his new wife, “Mandy Hazelton” (also played by Peggy Castle) suddenly takes ill and after a strange seizure she becomes possessed by the soul of Felicia. We soon find out that prior to her death Felicia began practicing “the dark arts” and the deeper she got the more evil she became. And because she is so evil both Dick and Mandy’s sister “Kate Hazelton” (Marsha Hunt) begin looking for a way to bring Mandy back. But other people feel differently and they will stop at nothing to keep Felicia here. At any rate, rather than disclose any more of the movie and risk spoiling it for those who haven’t seen it I will just say that this was a decent horror movie which managed to maintain the suspense right up until the end. Likewise, having an actress as stunning as Peggy Castle certainly didn’t hurt the film either. In short, don’t let the fact that this little-known picture is 57 years old or that it was filmed in black-and-white discourage you from watching it. It’s a “diamond in the rough” and I recommend this movie to all of those who might appreciate a film of this nature. Slightly above average.