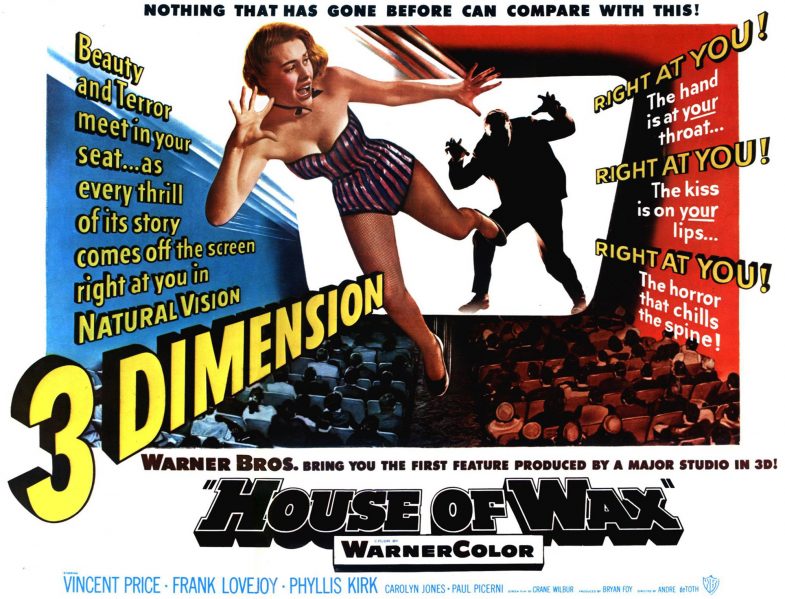 “Professor” Henry Jarrod (Vincent Price) is a sculptor who works in wax. He’s living in New York City in the late 19th Century, and he’s displaying his handiwork in a wax museum. When his partner, Matthew Burke (Roy Robert)–really his primary investor–balks at Jarrod’s receipts and tries to talk him into moving in a more commercial direction, perhaps with a “Chamber of Horrors”, Jarrod protests that he’s creating meticulous works of art, not cheap sensationalism. Jarrod tries to interest a new investor, but when the prospect says he can’t make a decision for a few months, Burke says he can’t wait. He suggests torching the place and collecting the insurance money. When Jarrod refuses, Burke torches the museum anyway, and the two fight. Jarrod supposedly dies in the fire, leaving Burke to collect. However, when a mysterious, disfigured stranger shows up, the resolution may not be so simple.

The debate that Jarrod and Burke have in the opening scene of this remake of Mystery of the Wax Museum (1933) is particularly ironic in light of the film’s history. House of Wax was made as a 3D film–a fact made more than obvious from the film’s opening credits, which are presented in a font made to look like it is bursting forth from the screen.

In the early 1950s, movie theater box office receipts were down because of television. Film studios and movie theaters were looking for gimmicks that would make films seem more special. They were looking to do things that television couldn’t do. According to film editor Rudi Fehr, “The House of Wax was made because the theaters were empty, people were staying home to watch television. In order to lure the audiences back to the theaters, Warner’s came out with 3D.” While this wasn’t the first commercial 3D film–1952’s Bwana Devil holds that honor, this was certainly one of the more popular ones.

Studio head Jack Warner told Fehr that he would have five weeks to edit the film after shooting was done. Fehr said they could get it done even quicker if director Andre De Toth would shoot the film in sequence. So Warner demanded just that, despite De Toth’s protests. Shooting in sequence is unusual and can make the on-set crew’s job much more difficult. But it certainly didn’t negatively affect the performances or De Toth’s direction, which are both outstanding despite a couple strangely truncated bits of exposition.