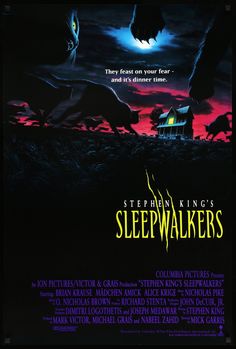 An incestuous mother and son (Krige, Krause) of preternatural origin move to a small town to find a young female virgin (Amick) the son may take the life force of and feed the mother with.

It’s Stephen King, who wrote the screenplay, at his not bad best. Interesting music; I’ve never heard Enya in a horror movie before but surprisingly it works. As with Ron Perlman, I’d pretty much sit through anything with Alice Krige in it.

The down side is that although the mother and son are interesting beings the curiosity about them the movie arouses is not satisfied. What are they? A kind of feline lineage is hinted at as they can morph into variations of cat like creatures yet cats are their mortal enemies (a scratch can be fatal). Where are they from? Egypt is hinted at (the origin of the worship of Bast, perhaps). Why are they called Sleepwalkers (origins of the incubus/succubus/vampire mythologies)?

Despite the questions raised and unanswered the film is still an enjoyable gore-fest horror break from reality.