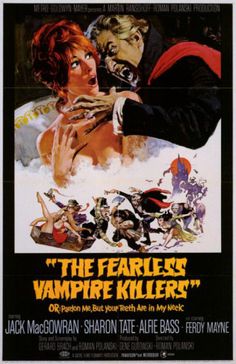 Well, what is this movie about? To begin with: although the vampire was best popularized in the modern era by English writers, it is really a myth of Eastern European Roman Catholicism. (I could explain that better – and why the English so well co-opted it – but obviously not here.) This type of Catholicism (which finally produced a Pope in John Paul II) now only thrives (and none too well) in Poland – Polanski’s home country. During the Second World War, Poland was utterly decimated. First, a large portion of its wealthiest citizens, who happened to be Jewish, were exterminated. The Polish catholics themselves were split radically between anti-semitic nationalists (who also, mistakenly, thought the Nazis would save them from the Russians) and pro-Communists who, mistakenly, thought the Russians would save them from the Nazis. Obviously, this was a no-win situation for the Poles. And yet the first cinematic impression of this disaster arrived in the form of – a comedy – Ernst Lubitsch’s “To Be Or Not To Be” (later remade by Mel Brooks).

Does the reader really need to know all this to appreciate this movie? actually, yes. This film is laughter at death’s door. The funniest and most memorable line in the film is from the Jewish vampire, responding to a threatened crucifix: “Oy vey, have you got the wrong vampire!” Funny? – Hilarious. Unfortunately, if this Vampire had any grandchildren, they all died in Auschwitz.

Why am I playing such a heavy hand here? Because this really is a great horror-comedy, far better and far more important than the studio hacks at MGM who released this film (after chopping it up) could ever have understood.

There is unfortunately no rumor that there’s a director’s cut in the vaults; it is well to remember that Polanski nearly disowned this film on release, and really only reclaimed it after the brutal slaying of his wife, who plays such an important role in the film.

But even as shredded as it is (pay especially close attention to the discontinuities involving the Professor), this is still marvelously written, directed, and photographed – truly frightening at moments, utterly hilarious at others, but always grounded in a particularly Polish sensibility which is now, alas, a thing of the past; – the preservation of a culture that, at its best, was among the best in Europe.