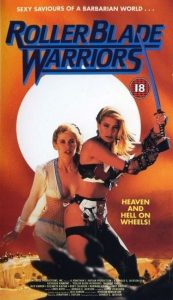 A worthy postulant for the coveted crown of “all-time worst savage apocalypse flick”(and you probably already know just how terrible these titles can be). So, anyhow…these chicks rollerskate through the dirt of decrepit post-Armageddon, dolled-up like a bunch of Thunderdome sluts in tattered stripper gear and laughably ginormous earrings. They arm themselves with massive aluminum swords, defense against a band of punkish morons who abduct marauding bimbos as sacrificial offerings to a rubber monster dwelling within a run-down factory warehouse.

An epic-fail of the highest order, although it is quite possible that this film was formulated as an intentional genre parody. As such, it certainly succeeds. If, however, this slatternly rollerboob fiasco was to be taken seriously, then God help everyone involved.