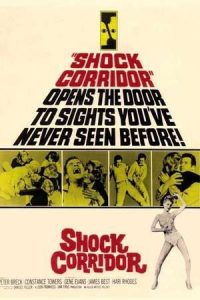 Samuel Fuller’s direction helps keep SHOCK CORRIDOR watchable but the script is never valid enough to make the film anything more than an interesting experiment that is only half successful.

PETER BRECK does a good job as a newspaper reporter with only one thought on his mind. (“Who killed Slade in the kitchen?”). He goes undercover at a mental institute in order to uncover the truth. His girl friend CONSTANCE TOWERS agrees to help get him get incarcerated on the pretense that he’s her brother and tried to rape her.

That premise alone is hard to make believable the quick succession of events that lead to Breck’s being shoved into a psycho ward. Director Fuller lets the camera discover several other rather interesting patients but none of them are fully developed as characters we can care about.

Without revealing the disturbing ending, let me just say you’re liable to get hooked into watching the film if you happen to catch it from the start. It’s worth a watch, if only to see where all the story strands are going.

But when it’s all over, you have to wonder whether anyone can really take the story seriously. Good try though–and Breck really gives his all to his volatile bursts of temper.