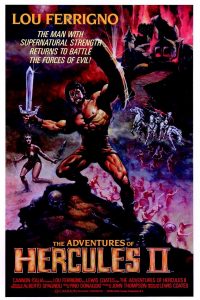 “Great deeds make us immortal.” – “We can’t all be so fortunate.” Indeed, so this didn’t help anyone’s career, I presume. Assisted by two young ladies (Milly Carlucci, Sonia Viviani), Hercules looks for the lost 7 thunderbolts of Zeus. One for example is hidden inside an electric fire monster he must hit on the head to cause a short circuit. Hercules flies around in space a lot (this is after all a movie by the director of “Star Crash”) and beats monsters painted by a five year old: Rotoscoping at its worst. The only thing I missed in the 80s video game look was a “Game over” text insert. The gods are beamed to Earth in a flash of green light with a squeaking electronic noise. Glowing shapes that reminded me of advertising for washing powder (cleaning ghosts or something like that) attack Hercules, men in rotten rubber costumes do the same – the adversaries look a lot cheaper than those in the first movie which was already abysmal. This sequel is less fun because it is less ambitious. The huge pathos of the first movie, trying to be monumental, is what made it so funny. Here, it’s just a quick rehash, much less entertaining.