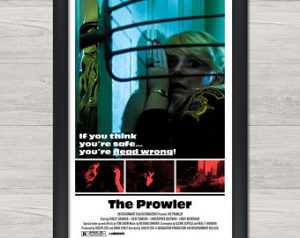 “The Prowler” was directed by Joseph Zito, an incredibly nice guy and talented artist, probably better known for his installment in the “Friday the 13th” series. Also notable is that this film features special effects and makeup by Tom Savini, the undisputed horror master of the era. According to Wikipedia, the “film has been praised by gore fans for its brutal and realistic murder scenes.” I am not sure about the realism, but the brutal aspect is certainly true, and if there is an uncut version floating around, it must be a bloodbath. Eli Roth also considers it one of his inspirations in the documentary “Fantastic Flesh” (which is a good film in its own right).

Writer Neal Barbera is the odd man out in the mix. While Zito and Savini are horror guys to the bone, Barbera is a member of the well-known cartoon family (you know, with Hanna-Barbera). His credit, going back to the 1960s, are writing dialogue and lyrics for Scooby-Doo, Yogi Bear and the Flintstones. How he came to write a slasher script is anyone’s guess.

The movie landed in Zito’s lap thanks to a man named Herb. (Exactly who this is I am not sure.) Herb was quite protective of the property; he was even offered a $700,000 advance for the distribution rights, but he feared the film would not make any more than the advance and chose to distribute it himself (which actually worked). And Zito hand-picked Savini based on his work in “Maniac”. (It is perhaps no coincidence that Robert Lindsay, the cinematographer of “Maniac”, was behind the camera on “The Prowler”.)

“The Prowler” is in many ways like the 1981 slasher film “My Bloody Valentine”, with the biggest difference being that “Prowler” is American and “Valentine” is Canadian. Both are excellent and both directors (the other being George Mihalka) are fine gentlemen, so I will not pick and choose between them here. Both films take place in a small town with the legend of a murder, where the killer has placed a so-called “curse” on the town where the residents cannot partake in a certain social gathering. Sure enough, the residents disobey the curse and are picked off in many brutal fashions. Must have been a 1981 thing.

I recommend “The Prowler” to any horror fan, and especially to those who love slashers of the 1980s. I think it has seen a bit of a resurgence in recent years, with shirts and posters becoming available. My friend and colleague Timm Horn talked high praise of this one, and was delighted to meet Zito with me. I wish I could have shared Timm’s full enthusiasm at the time.

There are some slow moments, and some scenes that make little sense. Exactly why the deputy sheriff and his girlfriend are snooping around inside a house without consent or a warrant is a bit of a mystery. But it moves the plot forward.

This film is best seen on the version available from Blue Underground. The choice between DVD and BD probably matters little, as the BD is rather grainy on larger screens (you can only clean up a film like this so much). The Blue Underground disc has audio commentary with Zito and Savini, which is priceless for their banter and tidbits about where they acquired coffins, and a nice ten minute behind-the-scenes featurette showing how the gore and kill scenes were done. Very interesting.

Added fun fact: Peter Giuliano, who more or less started his career with “The Prowler” as assistant director and playing the man in the mask, went on to produce dozens of successful films and TV shows, as well as working as assistant director on such notable works as “Ghost Busters”. Although not a well-known name, he may be the most successful person to have worked on this film.