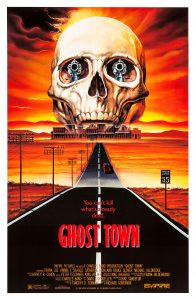 “Ghost Town” follows Langley, a policeman who arrives in a remote ghost town in search of a missing woman (Catherine Hickland). The town seems to still have some residents lurking about, however—ones from its nineteenth-century past.

This offbeat horror-Western pastiche seems to have flown under the radar of genre fans for nearly three decades now, having been relegated to home video in the late eighties after an extremely small theatrical run. While it’s not a masterpiece, “Ghost Town” is a weirdly charming and memorable collision of supernatural horror with the gritty Western; the result is an almost otherworldly atmosphere that is as dreamlike as it is dreary.

Written by David Schmoeller (“Tourist Trap”), the film plays on the Western angle considerably, and the tension between the two genres is a source of both humor and horror. The film is visually striking and atmospheric, drenched in dust and boasting some eerie Western set pieces and a dreary, ominous desert backdrop. The film is surprisingly gore-free for the most part, though it does supply some creative special effects with the gang of outlaws. Pacing-wise, the film does lull in spots, but for the most part keeps its wheels turning. Franc Luz and Catherine Hickland turn in memorable performances, as does Jimmie Skaggs as the zombified antagonist.

Overall, “Ghost Town” is a marginally impressive late-eighties effort that stands out for its unique blend of genres. Its off-kilter atmosphere is a major strength, but there are some memorable scenes throughout, as well as playful and sinister performances from the cast. Definitely not a genre masterwork, but when taken in the context of its peers, it’s one of the more unique late-eighties horror films.