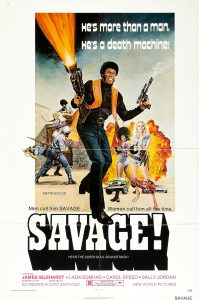 The story of a CIA(or some kind of military special forces adviser) played by James Iglehart as Savage set in some south east Asian country(read:Vietnam) who first helps the dictatorship and then realizes his mistake and turns on his former allies is not new.

There are a lot of clichés but this film has some very dark undercurrents that few films in the same genre can match.

Savage! (1973)is more reminiscent of The Spook Who Sat by the Door (1973) a highly controversial film about a African American who joins up with the CIA and starts a revolution in the USA using the knowledge he acquired from CIA.

One wonders whether or not Cirio H. Santiago(director of Savage!) saw The Spook Who Sat by the Door (1973)or if just one of those strange coincidences? The parallels between the political awareness among americas youth and growth of various organizations like Black Panther Party, Weather Underground etc and the ongoing Vietnam war is strangely reflected in this cheaply made b-movie.

Savage behaviour is a reminder of Muhammad Alis refusal to fight in Vietnam. Savage also behaves like a young member of the Black Panther Party and film becomes a metaphor for the internal struggle that USA was going through at that time.

However it is a blaxploitation movie filled with fun, action scenes, loose women(and some interracial sex!) especially knife throwing bomb shell Lada Edmund Jr. who is just amazing in this film.

Lada Edmund Jr. was a very talented gogo dancer and there are lots of nice clips of her on Youtube.

Why it is more or less forgotten today is strange but should be seen by anyone who wants to see a different kind of blaxploitation film.