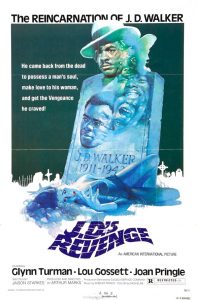 Glynn Turman plays Isaac “Ike” Hendricks, an amiable law student in New Orleans. One night, in the company of his girl and his friends, he decides to undergo hypnosis, just for the hell of it. However, this enables a restless spirit named J.D. Walker (David McKnight) to possess Ikes’ body, all in the name of revenge. J.D. was a lowlife criminal who’d been made to look guilty for a womans’ murder back during the WWII era. Now the possessed Ike starts to sound and act like J.D., and indulge in various unsavoury pursuits while going about this mission of vengeance.

A very engaging cast helps to make this watchable. It’s never a great film but it is a decent and enjoyable one. Producer / director Arthur Marks injects lots of grisly slaughterhouse imagery into the proceedings, which get fairly bloody and intriguing if never exactly scary. The movie goes a fair distance on the performances by young Turman (“Cooley High”, “Gremlins”, “John Dies at the End”). Naturally, he does look to be having a fine time when called upon to imitate McKnight in his portrayal of the slick and creepy J.D.