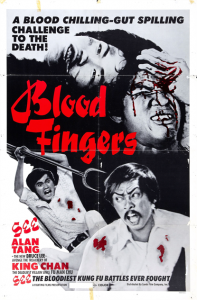 The Thai Guy the previous review asked about was World Boxing Champion 1960 Hon San Fung (champion in Asia, I presume). And he was hired to play the role eventually given to Mars, cuz he hurted badly the poor Mars in their first on-screen match, so the director/actor Kuan Shan (the elder brother in this movie) prompty changed the things giving to Mars the role of the cousin and keeping the boxing king for a cameo (he did just this movie). Aside this trivia, this cheap movie has some interest mainly for the curiosity in seeing Jackie Chan as an extra and for the incredible amount of bloody violence. Its a Big Boss rip-off with two brother arriving in Bangkok for a job and eventually hired in a company owned by (the late) Chen Sing, moustached and muscular as usual. When the elder bro finds out the usual drug smuggling behind the Company he works for, Chen Sing orders his death, uncaring the victim is now married with his daughter (infact he will kill her too). Predictably the younger brother (taiwanese vet Raymond Lui of Tiger Jump fame) goes on rampage killing everyone in a gore non-stop action. A brutal movie from the brutal and glorious old days of trashy kung-fu cinema. The beauty is actress Tian Ni, wife of the late Hong Kong star Clifford Ngok (Yueh Wah) in real life. Director and co-star Kuan Shan was the father of actress Rosamund Kwan. A funny thing is that no matter if the movie is a modern crime drama: the jumps they made in fighting are the same high jumps they made in Fantasy wushapian. Hong Kong cinema lovers will recognize future director Yuen Kwai and valid coreographer Wilson Tong (Sammo Hung’s The Victim; Game of Death and countless others) as the tough guys alongwith Jackie Chan. More a Who’s Who of Kung-Fu genre than a movie interesting on his own.