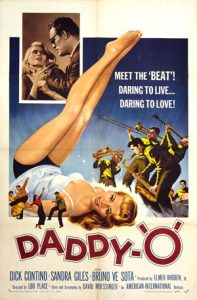 Truck driver, singer and high trouser enthusiast Daddy-o is a real hip cat. He hangs out at a pizza parlour where he acts moody, sings deep songs like rock candy and dances aggressively with women while repeatedly pointing out to them that if they weren’t a woman he would punch them, right in the face. Because their driving is substandard.

While Daddy-o is racing against a pointy breasted stranger his best friend gets run off the road and killed. How close were they? Some people have brothers, daddy-o had this guy. That’s how close these two were, though they are only seen to exchange five lines of dialog in the entire movie.

Naturally Daddy-o isn’t best pleased and after a run in with a myopic gym manager he drifts into some shady business delivering dope for a fat man who inexplicably spends all his time in the gym. Maybe he isn’t getting any thinner because the gym doesn’t have any actual gym equipment that I could see.

The other reason for tuning in to this highly dated yarn is the way the script can’t decide if Daddy-o is a mean moody type or a fun loving hipster liable to burst into song at any moment. It probably doesn’t help that the teenage rebel looks about 40 either.