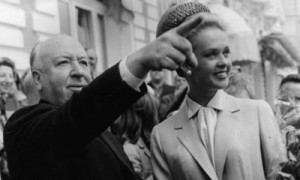 Nine of Alfred Hitchcock’s silent movies are being remastered in a major tribute to the king of suspense as part of the Cultural Olympiad.
His films are considered to be some of the most important and influential of all time and he is seen as a pioneer of cinema.
As part of the celebrations the BFI is showing all 58 of his surviving films as well as re-mastering his nine remaining silent movies – the first he ever made.
Bryony Dixon, curator of Silent Film at the BFI National Archive, said: “The government asked all the big national institutions in Britain what they would like to do to celebrate (the Olympiad) and there’s really only one name that suggests itself in film, which is Hitchcock.
“He is our big national icon – so we have Shakespeare, you have Dickens and you have Hitchcock.”
Hitchcock may be one of the most famous film directors of all time but his first 10 silent films, nine of which have survived, are relatively unknown.
Made from 1925 to 1929 they are blueprints for the rest of his work and display many of the motifs recognised as Hitchcockian.
So fans of classics such as Vertigo, The Birds and Psycho will recognise similar elements in these early works.
The restoration of the “Hitchcock 9″ is the largest restoration project the BFI has ever undertaken.
It is possible due to advances in technology and co-operation from collectors around the world.
The BFI national archive held the nine films, but each had imperfections and so other copies were sourced internationally.

Once they had collated all the surviving copies of each film, including some of the orginal negatives used by Hitchcock, the process of painstaking restoration began.
Every frame – more than 100,000 for each film – was examined before remastering those that had deteriorated or been damaged over time.
The restoration has made the films fresher, crisper and given them more definition and will enable a deeper appreciation of Hitchcock’s work.
Twenty minutes has been added to the director’s debut feature film, The Pleasure Garden, after a number of different versions were merged by the specialist teams.

The BFI National Archive has so far raised just under £1m to support the restoration and they will also be publishing a new book ”39 Steps to the Genius of Hitchcock” exploring Hitchcock’s work and his legacy.