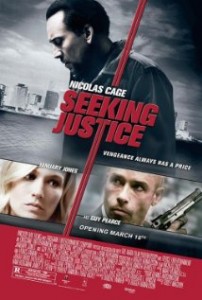 Cage plays Will, happily married to symphony musician Laura (January Jones) until she is brutally attacked and raped by an unknown perpetrator. Naturally Will is driven nearly mad over his anger and utter helplessness regarding the unfortunate event. While in the hospital, Will is approached by Simon (Guy Pearce) who offers to “take care” of the attacker for Will. He explains that he is from a secret syndicate of citizens who are concerned about the crime and corruption in New Orleans. They have vowed to take matters into their own hands, and selectively wipe out the worst criminals. In exchange for vindicating Will’s wife, Simon says that they will simply ask for his help in a future case-nothing major, he assures. After some serious contemplation, Will takes the bait, and his life becomes a living hell. Will becomes embroiled in a deadly game that is initially beyond his comprehension, and is forced to uncover the secrets of the syndicate to survive.

I’ll admit that the story grabbed me and kept me guessing until the end. Seeking Justice is a solid B movie and a step above most straight to DVD fare. The performances are good; Cage is thankfully more subdued than he has been of late, and this is one of the better turns by Jones. She isn’t as wooden as she usually is, and it’s nice to see her loosen up; particularly when the couple shares some happier moments early in the film. Pearce is convincing as the sinister and menacing mastermind of the syndicate.

Seeking Justice falls somewhere between guilty pleasure and good movie, but it is worth a watch, especially if you are a Cage fan who has grown weary of his recent on-screen antics. The action scenes are serviceable, and the ultimate resolution is satisfying. Director Roger Donaldson (The Bank Job, The Recruit, Species) knows his way around action, so the movie delivers some interesting set pieces. It was filmed in New Orleans, so there is a sense of authenticity throughout. This will likely be considered to be a hidden gem in a few years. It is a lot smarter and intriguing than one might expect.