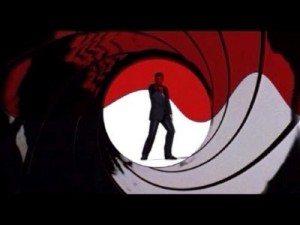 James Bond may have changed — six times, to be precise — but the movies’ iconic opening credit sequences have remained fundamentally consistent: unique, independent works, seducing audiences since “Dr. No” hit the silver screen in 1962.

To celebrate the franchise’s 50th anniversary, the Los Angeles County Museum of Art has opened a new exhibit, looping all 22 sequences on a projection wall and five 40-inch plasma screen televisions, that divide and categorize the Bond eras. “…Is James Bond,” co-organized by the Loyola Marymount School of Film and Television, will run through Sept. 9.

James Bond belongs in an art museum for three reasons, Mitchell said: The secret agent has evolved — aesthetically and culturally — through generations, making him one of the longest-lasting film figures to come out of Hollywood. The innovative intros, featuring nude female silhouettes, pioneered a heightened sexuality in American cinema, which was considered radical in the ’60s. And, Mitchell said, the three-minute segments are fresh, edgy and artistically exquisite.

Maurice Binder, the film title designer who created the signature gun barrel opener, started the legacy and worked on 14 of the 22 movies, Mitchell added. Daniel Kleinman and Robert Brownjohn followed, incorporating their creative, masterful takes on Bond intros and cementing the tradition.

“Bond’s first appearance in the ‘Goldfinger’ credit sequences was the greatest entrance a hero has ever made in a modern movie, in my opinion,” said Mitchell, a former film critic at the New York Times and LA Weekly. “Just look! His face is projected on a woman’s body, which has been entirely painted in gold.”

The exhibit, located in the museum’s Art of the Americas building, provides headphones for audio. Each sequence features the biggest pop voices of its respective years, including Shirley Bassey’s “Diamonds Are Forever,” Paul McCartney & Wings’ “Live and Let Die,” Tina Turner’s “Goldeneye” and Madonna’s “Die Another Day.”

A salute to the legendary title designers is posted on the freshly painted red walls: “It had not been done before — using a credit sequence to communicate the id of a movie, instead of tense visages of the stars or a bouncy, comedic interlude. But the James Bond films set the tone for a new world with their openings.…”

From Sean Connery’s era to Daniel Craig’s current reign, the intros are chronologically ordered, taking spectators on a journey through threats of nuclear war, cat-stroking evil bosses and what can now be considered a sorority of dancing Bond girls.

Steve Ujaki, dean of the Loyola Marymount School of Film and Television, said the exhibit is a highly telling look at past trends inspired by modern art, pop culture and current events.

“Watching these sequences, you have a kaleidoscopic view of social, fashion, design and animation of the last 50 years,” he said. “You can re-experience different stages of America, depending on what was cutting edge at the time. It’s as educational as it is entertaining.”

Every Thursday in July and September, LACMA will run Bond movie double screenings, from “Dr. No” to “Quantum of Solace.”

“Skyfall,” the 23rd installment of the franchise, will be released in October.