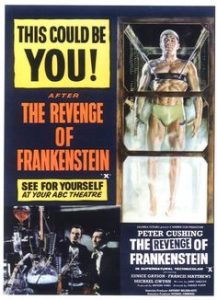 Dr Frankestein, Peter Cushing , escapes from guillotine being rescued by his servant and he then relocates to Carlsbruck, Germany, where he becomes a popular society physician, Dr Stein , but being panned by other doctors. Helped by another physician , Francis Matthews, restart the eerie, scary experiments by use parts of dead bodies. Meanwhile, a police inspector, John Stuart, investigates bizarre killings.

Another Jimmy Sangster written, Terence Fisher directed movie, being distinguished by their great earlier entries into the genre. Nicely and creepily made , but inferior followup to the original The Curse of Frankenstein, though superior to the subsequent sequel The Evil of Frankenstein . Peter Cushing gives an awesome acting , as always, as the malignant and misunderstood doc who just can not stop his macabre experiments and schemes to transfer his servant’s brain into another sewn together creature and creating a new monster well incarnated by Michael Wynn .Support cast is pretty good, such as Francis Matthews, Michael Gwynn who went to star in several Hammer films , Lionel Jeffries , John Welsh , Eunice Gayson , the usual Michael Ripper and John Stuart who was a former matinee idol whose debut in movies was as long as1920.

It packs a colorful and brilliant cinematography by Jack Asher. Frightening as well as evocative musical score by Leonard Salcedo. The motion picture wes well directed by Hammer maestro , Terence Fisher . He was a prolific and fine artisan who realized some masterpieces , especially for Hammer Films . He directed all kinds of genres, standing out in Terror movies. As Terence directs such good movies as Frankenstein and the monster from hell, Frankenstein must be destroyed , Frankenstein created woman , The devil rides out , Island of the burning, Dracula prince of darkness, The brides of Dracula , Horror of Dracula, Island of terror, The gorgon , The phantom of opera, The curse of werewolf, The hound of Baskerville , The mummy, Race for life, Black glove, Blackout, Unholy four, Four sided triangle, Spaceways , 3 stops to murder, Man bait, A stolen face ,among others