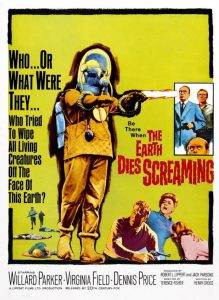 A warm-up by director Fisher for his “Island of Terror”(66) and “Night of the Big Heat”(67), this is a template for alien invasion pictures: there’s a small group of survivors (in rural England) and marauding invaders, here in the form of slow-moving robots. Since the invaders never do move beyond a slow walk, they never seem to pose a serious threat unless you happen to run right up to them (which one of the characters does indeed do). Then they zap you with a touch of their cold hand and you eventually turn into a controlled zombie. It sounds a bit silly, but the film manages to convey an eeriness to the whole setting. Maybe because it’s in black & white, it also reminded me a bit of “Night of the Living Dead”(68). The sense of isolation and the threat are very similar.

What sets this above other sci-fi films of the fifties & sixties is the lack of clunky, melodramatic dialog. The intent by the filmmakers and actors is that this is really happening. The survivors are an average group of citizens, caught in a traumatic situation. None of them are prepared or trained for something like this. There’s always that one troublemaker in the group, of course, brandishing a revolver and behaving like an ass. But the story needs that extra tension to make it more interesting. It’s low budget, but they didn’t really need a lot of money to show empty streets or just several bodies littering the landscape. This one, though, really begs to be remade with a decent budget, as a full throttle invasion story. A similar Americanized version was the earlier “Target Earth”(1954).