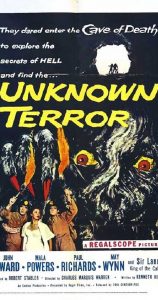 A search for a lost spelunking brother leads to the “Cave of the Dead”, which is infested with a fast-growing, parasitic fungus. Despite the supremely silly, sudsy climax, ‘The Unknown Terror’ isn’t a bad bargain-basement sci-fi/horror. The actors are serviceable in pretty standard roles, the script better than usual for the genre, and the music is very good (especially the foreboding calypso number “Suffer to be born again”, apparently written for the film and performed by early calypso star Sir Lancelot). The scenes in the caverns are nicely done and generate a considerable amount of tension considering the foamy nature of the threat. The film might have been a minor (or cult) classic if a better story had been spun (the rogue-fungus scenario just doesn’t match the imagery) and the ridiculous fungus-covered ‘monsters’ dispensed with. Still, it’s not too bad for what it is, but for a masterful malevolent mushroom movie, check out Toho’s freaky fungal-fantasy ‘Matango’ (1963).