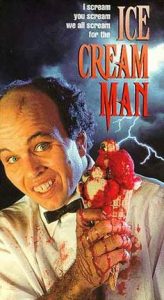 This movie is so bad; it’s almost too good to be true. Believe me, I’ve seen a lot of bad movies over the years. I’ve seen everything from Troll 2 to Pteradactyl. Sure, these are some unintentionally hilarious movies. But nothing can compare to the Ice Cream Man. Ice Cream Man is a hilariously bad movie with terrible actors and even worse dialog. But the real hero behind all of this is Clint Howard, the Ice Cream Man. I cant believe this movie was made in the 90’s. It looks like a cheap 80’s movie. But what do you expect from a director which only movie experience is from porn movies.

I can’t believe this is supposed to be a serious movie. The first time I watched this movie I had to rewind almost every scene. I couldn’t believe my eyes. Where they really serious about this? At sometimes it seems like an exciting adventure movie for children, the ones where a group of kids make a secret club or something to catch the bad guys. Just like the Monster Squad. Other times it seems like a comedy, and some times even family movie. But then these nasty scenes appear and totally switch the tone of the movies so randomly. It’s hard to explain, but I just can’t seem to understand the setting of the movie, something that really bothers me about the movie. Not that you can take it seriously anyway.