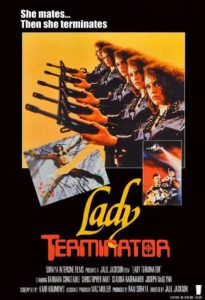 The film begins with the South Sea Queen having sex with a guy with big hair, before chewing off his tackle with her snatch, asking ‘Is there any man who can satisfy me?’. Her next conquest, her 100th husband, isn’t about to let the queen take his manhood, pulling the source of the queen’s power—a snake—from between her legs, and banishing her to the sea. Before the waves swallow up her castle, the queen swears vengeance on the man’s great grand-daughter.

A century later, and the spirit of the South Sea Queen possesses sexy anthropology student Tania (the beautiful Barbara Anne Constable) by magically inserting a snake up her chuff; she then proceeds to carry out her threat, hunting down aspiring pop singer Erica (Claudia Angelique Rademaker), descendant of the man who betrayed her.

From hereon-in, Lady Terminator consists of cheap but very bloody carbon copies of The Terminator’s most iconic scenes, with a nightclub shootout (but only after Erica has sung a dreadful song in its entirety), an assault on a police station (with lots and lots of juicy squibs, including bloody shots to the crotch), and the Lady Terminator performing surgery on herself, removing her eyeball to run it under a tap, before popping it back in.

All of this is executed with very little technical prowess but lots of gusto, making the film a blast for fans of cheap, foreign exploitation. More violent than Cameron’s film, with the added bonus of lots of nudity courtesy of sexy Barbara Anne Constable, and a memorable turn from Adam Stardust as gung-ho cop Snake, who sports one of cinema’s most impressive mullets, this is trashy z-grade fun from start to finish.