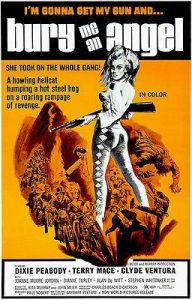 Dixie Peabody stars as “Dag” in this hypnotic biker film. Dag and her two male biker friends search for the murderer of Dag’s brother, who was shot during a party. The film marches the trio into constant trouble,and a friendly encounter with Dan”Grizzly Adams”Haggerty as a young hippie. The music in the film reflects the times of free love and peacenik joy, but the background score in the flashback scenes invoke a witchy pride to the story that itself is dreamy and illusionary.