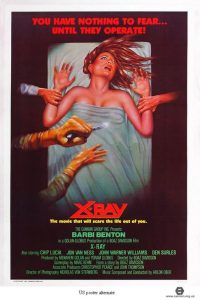 Incredibly strange, over-the-top and at times downright crazy slasher about a young woman who sees her best friend murdered after they laugh at a boy who left her a Valentine’s Day card. Flash-forward nineteen years and the now woman (Barbi Benton) is at the hospital for a check up when a madman begins killing everyone trying to get to her. HOSPITAL MASSACRE, also known as X-RAY and several other titles, is a pretty poor movie that has so many unintentionally laughable moments that you really can’t help but have fun with it. Director Boaz Davidson has said that he didn’t know too much about the genre and had never made a slasher so he was pretty much just throwing everything in that he could. This includes all sorts of silly “jump” sequences, which are just downright silly at times and even worse is how everything gets drawn out to the point where you just get tired of watching it. There are simply way too many sequences where scenes keep on going and going when they should have been much shorter. A bit more editing probably would have made the film much more entertaining. There are some things here that are good and this includes the gore. The film contains a pretty large amount of blood especially for a film of this era when most were being cut up by the MPAA. Another memorable thing is the “performance” as the killer because it’s just so crazy and over-the-top that you can’t help but laugh at times. Still, the weirdness of the character certainly makes you remember him. Benton is decent in the role and manages to show off her Playmate breasts during a rather awkward examination sequence. The rest of the performances are certainly below par but they add to some of the laughs. HOSPITAL MASSACRE is mainly going to appeal to those who enjoy those bad slashers of the decade. You have to leave it to Cannon as they really did deliver a pretty wild little film.