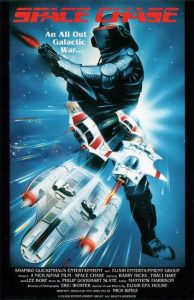 Space hero and bounty hunter Ryan Chase (Yes, that it his name and that is where the title came from) and his alien buddy are hired/pressured to rescue a brilliant (Well according to the script) scientist and eventually his daughter from the evil Dr. Chrome (Yes, that is the villains name even though it sounds like the name of a panel-beating business more than that of a supervillain) who is blackmailing him into providing a limitless energy source for his robot servants who are called drones (I think they’re meant to be robots- they’re basically these dudes in black armour but you can see their fleshy necks all the time). Basically it is lame replication of the Death Star rescue and battle segments of Star Wars. This is definitely one of those so bad its good movie.

Some ‘high’ lights- – Chase’s alien buddy who is apparently a chameleon of some sort which basically means the colour of the paint on his faces randomly changes throughout the movie with nothing to with the environment from gold to blue to green.

The bad and obvious imperial march ripoff playing whenever the badguys are on screen.

Dr Chrome threatening to Drone (Presumably turn into his robotic servants) the scientists daughters- of course it doesn’t sound like that the way he says it.

The same cheap explosion shot used every time a spacecraft is blown up.

The fact all the Chrome Drones simultaneously lose power for 15 minutes a day while they all recharge- bit of a design there, fella.

Our heroes’ strange habit of shooting the storm tr sorry, drones in the groin in the gun battles.

The fact that the ostensible star of the movie doesn’t actually do very much throughout most of the movie.

That’s not to mention the flat read from the cue card style acting, the unbelievable cheapness of the sets and SFX and awful dialogue (Much of it lifted almost verbatim from Star Wars). They couldn’t even afford decent lighting for any of the sets. If you find a copy of this deservedly obscure piece of celluloid watch it, its good for a laugh.