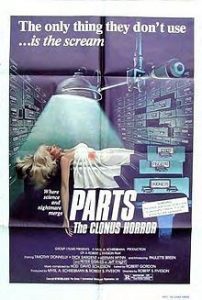 The premise is better than even your average Hollywood blockbuster these days; it poses some interesting moral dilemmas. Although the score is sometimes obtrusive, it also provides a few lovely moments when Richard is walking by the river. Watching the movie, you can see where a lot of plot developments probably looked very good on paper. Richard’s discomfort in modern society is an interesting problem to ponder, and the ending probably would have been a nice ’70s-style mindfuck if the preceding affairs hadn’t been so goofy.

Unfortunately, the movie is visibly cheap, making the flaws all the more obvious. The “clone farm” is very obviously a college campus, and a beer can serves as a major plot point. Lena and Richard have zero chemistry — we are supposed to believe this is a meeting of kindred minds, but there doesn’t seem to be a brain cell between them. The “cranky old couple” schtick also gets real old, real fast. There are also some mistakes that can be blamed on bad directorial choices, such as the decision to hold a climactic conversation out of reach of any audio equipment whatsoever.