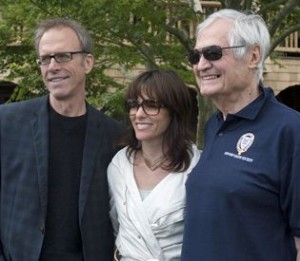 Roger Corman, the king of B movies, is living proof of P.T. Barnum’s observation that nobody ever went broke underestimating the intelligence of the American people. But the iconic low-budget legend says he’s tried!

The producer of cinematic popcorn such as “Dinocroc vs. Supergator,” “Camel Spiders,” “Sorority House Massacre” and “Attack of the 50ft Cheerleader,” Corman said that when the SyFy channel came to him a few years back and asked him to make “Sharktopus,” he said no.

Eventually, Corman relented and, of course, “Sharktopus” became the highest-rated program of the year for the SyFy channel.

“So I figured, OK, the acceptable level of insanity is much higher than I ever thought!”

At which point, Corman and his staff brainstormed a whole day to come up with “the most insane title we could think of” and the result was “Piranhaconda,” which debuted on the cable channel Saturday night. It’s the tale of a half piranha, half anaconda that attacks a movie crew when her egg is stolen.

“It’s to my advantage if it gets a big rating … but personally, I would not feel aggrieved if it didn’t, because I could put all of this stuff behind me and go back to real films,” Corman laughed.

The prolific 82-year-old filmmaker was in Provincetown over the weekend to accept the Filmmaker on the Edge Award from the Provincetown International Film Festival in recognition of his 57-year career and his hundreds of films.

Also grabbing kudos at the annual flick fest was indie-movie queen Parker Posey and “This Film is Not Yet Rated” documentary filmmaker Kirby Dick.

“P-town is pretty great,” Posey told us. “It’s like ‘Fantasy Island’ meets ‘Tales of the City.’”

Posey, who had guest-starring stints in the CBS hit “The Good Wife,” and Showtime’s “The Big C” this past season, picked up the Excellence in Acting Award in recognition of her work in dozens of indie films such as “Adam and Steve” and “The House of Yes.”

“I’ve walked up and down the streets and talked to people and felt so supported,” she said. “There have been lots of cultural conversations with nice people, I love the gay community, and I’ve had a chance to spend some time with all of these people that I’ve known for years, so it’s been great.”