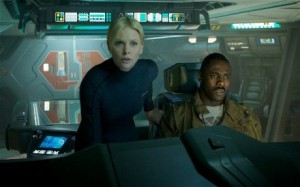 See if you can guess which vapid, if visually impressive, Ridley Scott science fiction opus these quotes are describing:
“Not the seminal science fiction film one wants from Ridley Scott…the sets and special effects are well done, but these things no longer surprise or tantalize us as they once did.” – The New York Times
“There is very little involvement with the characters themselves…a generally good cast in cardboard roles.” – Variety
“An overblown B-movie…technically impressive but awfully portentous and as difficult to sit through as a Black Mass sung in Latin.” – Los Angeles Herald Examiner
“An empty bag of tricks whose production values and expensive trickers cannot disguise imaginative poverty.” – Time Out
Any ideas? Guess again. All four are actually clipped from contemporary reviews of his 1979 film Alien, which few people would dare to argue these days is anything other than a classic of its genre.
So there’s a chance Scott will not have been too surprised that similar potshots have been taken at his new film, Prometheus. At a time when major studios seldom dare to stray outside the focus-grouped blockbuster formulae, this big-dreaming shlock opera, with its raveled plot threads, cod-theistic pomp and suppurating urns of stygian goo has provoked widespread puzzlement – and, in more than a few cases, fury.
The film’s co-writer Damon Lindelof, for example, has been carpet-bombed with indignant messages on Twitter, although in fairness, these are no more bone-headed than 99 percent of everything else said on the social networking site. Significantly more tedious is the way the film’s detractors have confused low-level nit-picks and intentionally vague plotting for fatal flaws in Scott’s craft.
“Yeah! Take that, Sir Ridley Scott!” seems to be the gist. “If you’re so smart, with your conceptually audacious two-hour epic about mankind questing beyond the stars in search of a face-to-face encounter with the divine, how come Charlize Theron and Noomi Rapace don’t run sideways to get out of the way of that crashing spaceship?”
How come? Who cares? Having now seen Prometheus twice (and enjoyed it even more the second time than I did the first) I can confirm that the fact neither Theron nor Rapace thinks to run sideways during an action sequence predicated on them running forwards does not render the film worthless – and anyone who finds themselves getting worked up about it is making some fairly basic mistakes about how to enjoy blockbuster cinema.
Despite its faults, which are fairly mundane as these things go, Prometheus is a film that demands to be puzzled over, marveled at, even dreamed about. Some of the dialogue might not stand up to scrutiny, but my word, the ideas do. You may already be aware that fantasy writer Adrian Bott has, fairly convincingly, mapped the film’s underlying mythology onto the Dying God archetype described by James George Frazer in his seminal study of religion and folklore, The Golden Bough. I don’t recall anyone doing that with Avengers Assemble.
I suspect that with Prometheus you’re either on board or you’re not, and no amount of coaxing will convince the moaners to go back and work out what they’ve missed. But I wouldn’t be too surprised if, in 30 years or so, they’re being quoted at the top of an article like this one.