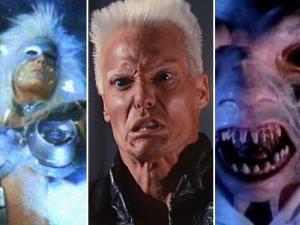 In-depth analyses of the latest movies and TV shows are all part of our daily diet here on Den of Geek, but there are times when – particularly on a Monday – all you really want to do is watch some really cheesy movie trailers.

This is our rather flimsy introduction to the offering below – a brief, lighthearted look at some trailers from the last decade of the 20th century. And as you’ll see from an even brief perusal of these promo clips, 20 or so years really is a long time in filmmaking – particularly for those working in the lower echelons of the industry.

You see, the 90s marked a significant turning point in cinema. The steadily encroaching power of computers, used sporadically in the 80s in such pioneering flicks as Tron, Star Trek II, Flight Of The Navigator and Young Sherlock Holmes, was really beginning to make its presence felt in the 90s.

Films including Terminator 2 and Jurassic Park ushered in a new era of remarkable digital effects, and those old ways of creating monsters and ships – stop-motion work, scale models, puppets and the like – were gradually replaced by computer-generated environments and ships. This might explain why some of the trailers below look so extraordinarily dated; even at the time of their release, the techniques (and technology) used to make them was already looking like something from a bygone era.

This, of course, merely makes movies such as Alienator and Dark Universe all the more glorious to behold. It’s with great pleasure, then, that we share with you 10 of our favourite, decidedly cheesy sci-fi movie trailers from the 1990s…

Space Chase (1990)
Ridley Scott spent a fortune constructing the interior of a space ship in Prometheus, with his crack team of production designers working hard to bring convincing texture and contour to the titular vessel’s interiors. Ridley would kick himself if he saw Space Chase, we suspect, since its producers managed to create some futuristic interiors with little more than a few sheets of hardboard and some left-over computer desks from an Argos clearance sale.

Also notice how, in true 21st century style, the trailer for Space Chase appears to give away the entire film’s plot. It was clearly a marketing pioneer.

Alienator (1990)
The first thing this trailer is likely to do is make you stop and say, “Wait. Isn’t that Jan Michael Vincent? As in Stringfellow Hawke from Airwolf?” The answer is, of course, yes it is. And yes, that line Mr Vincent gets to utter, “This is the toilet of the interplanetary penal system. All I get to do is flush it” really is the best line to appear in a 90s sci-fi movie. Bar none.

A film ostensibly about the lead singer of a hair metal band killing innocent people on a future planet Earth, Alienator is the epitome of low-budget cheese. And just when you thought this particular trailer, with its stock sound effects, Aliens rip-off soundtrack and hilarious soundbites couldn’t get any better, it concludes with an epic decapitation. Fantastic.

Solar Crisis (1990)
Unlike the other movies in this list, Solar Crisis wasn’t actually a cheap film to make – costing an estimated $55 million to make, and starring Charlton Heston, it was anything but low-budget. It was, however, a complete mess of a movie, with a muddled script and some of the hammiest performances of the decade.

Our favourite moment? The “Monster Sun-flare!” speech near the beginning of the trailer. It’s a particularly fine demonstration of “Acting!” in the Team America sense of the word.

Dead Space (1991)
Yes, years before Dead Space the video game turned up to scare the hell out of us all, a movie of the same name came along with a vaguely similar premise. 1990‘s Dead Space starred Marc Singer, the actor in those Beastmaster 80s fantasy movies. Dead Space was produced by Roger Corman, which may explain why its plot is so similar to one of his earlier pictures, Forbidden World.

Okay, so its aliens running amok on a space station plot isn’t particularly original, but there are lots of brilliantly wobbly creature effects to enjoy. And somehow, the trailer below manages to turn the apparently innocent phrase, “I think it’s about time I took a look at your monster” into a disgusting-sounding euphemism…

Project: Shadowchaser (1992)
Ah, a 90s sci-fi movie that isn’t set in space. In fact, this one’s a rather odd mash-up of The Terminator and Die Hard, with a group of terrorists led by a Schwarzenegger-like pumped up android take over a hospital and hold the president’s daughter hostage.

The cast’s surprisingly starry for a B-movie, though, with Joss “Diplomatic Immunity” Ackland, Meg Foster and The Karate Kid’s Martin Kove all present and correct. This is perhaps the ultimate 90s action trailer, full of blue filters, explosions, guns, a gruff voice-over, and the awesome line, “Someone programmed him to kill. Now, some sucker’s gotta pull the plug!”

Dark Universe (1993)
Another film that cheekily nicks the music from Aliens, this extraordinarily cheap trailer for Dark Universe manages to pack in some stock footage of an explosion, a morphing effects sequence, some more stock footage (this time of some crocodiles), nudity, and some really, really bad model effects.

Oh, and this no-budget Alien rip-off also features a rubbery monster with an exceptionally familiar face…

Robot Wars (1993)
Not a trailer for the TV series presented by Craig Charles, but the 1993 movie which served as a spiritual sequel to the giant robot brawler movie, Robot Jox. With a generous use of scale miniatures and stop-motion animation, this low-budget classic featured lots of wonderful robot-on-robot action – much of it showcased heavily in this 95-second trailer. For more glorious Charles Band-related robot action, also see 1990’s Crash And Burn, marketed as Robot Jox 2 in some countries.

Carver’s Gate (1995)
In a depressing future where Earth has been destroyed by an environmental catastrophe, citizens escape from reality by playing some sort of VR videogame in which humans battle monsters with fake-looking guns. Actually, this film’s premise, with reality and the virtual realm crossing over, sounds like something worthy of a Philip K Dick story, or like a forerunner to David Cronenberg’s eXistenZ.

Unfortunately, Carver’s Gate’s acting and special effects make it rather less of a “provocative science fiction thriller” than the trailer suggests. There really are some amazing computer effects, though.

Hologram Man (1995)
“Relax. I’m a genius,” says William Sanderson, the Blade Runner actor who makes a brief appearance in the trailer below. It has to be said that the filmmakers behind Hologram Man were geniuses, too, since this is a truly wonderful concoction of car crashes, explosions and shouting body-builders. Hologram Man also features a character called Slash Galagher, which is just glorious.

How could a movie this amazing – and this explosion filled – go straight to video? The mind boggles.

Nemesis 2: Nebula (1995)
The most depressing thing about the current filmmaking climate in America is that movies like the ones on this list seem to be so seldom made these days. The home video and DVD market once provided a healthy stream of low-budget fare, resulting in a climate where resourceful producers could make an entire string of cheap sci-fi movies and have a place to sell them.

While on demand services have replaced video stores, cheerful stuff like Nemesis 2: Nebula seems to have all but disappeared. This is a shame, because the world still needs movies where female body builders run around pretending to be robots from the future. Hailing from a time where a small team of filmmakers could happily wander into the scrublands of America and come back with a serviceable action movie, Nemesis 2 is a work of cheesy brilliance.

Well, that’s what the fabulous trailer here would have us believe, at any rate…