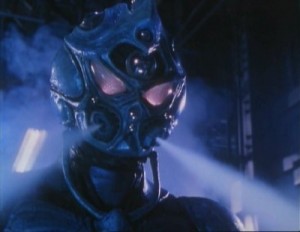 A race of aliens are trying to run the earth with an evil corporation. They have a reptile-like appearance, which I suppose pleases David Icke. Their next goal is to attain the guyver, a special device that turns the user into a living suit of armor. Unfortunately for them, a young martial arts student finds it first.

This film should have been awesome. The cast was amazing (more on this later) and the general idea was decent. Sure, it reeks of “Mighty Morphin Power Rangers” and “Voltron” in some ways, but it’s based on a Japanese comic, so you’ll have that. Let’s go over the negatives before I try to say something nice.

The fight scenes dragged on way too long. The Guyver has the power to use knives and cut his opponents to shreds, but he rarely does it and waits until the end of the fight to do so. So, we’re left with a long fight scene followed by another long fight scene… less entertaining than the one from “They Live” and cheesier because they keep fighting the same guys and it’s just rubber suit hitting rubber suit.

The acting was awful. It was cheeseball. Most noticeably from Mark Hamill, who plays a CIA agent. I didn’t understand why a CIA agent was investigated domestic murder (isn’t that what the FBI is for?), but even more confusing was Hamill’s over-the-top approach and bad mustache. I really hope this was intention on the part of the creators, because Hamill can do so much better than this (see “Star Wars” and “Silver Bullet”). Even if intentional, it was still bad.

The scene cuts were annoying, with these diagonal slashes indicating a new scene. They were not necessary, done too often, and just made the film seem even more of a cartoon. Maybe the audience was supposed to be kids, who might like that. I don’t know. I just thought it was excessive.

And yes, there were too many costumes. I don’t know how to get around that since the film was about aliens. But the costumes were just so cheesy. Maybe it was better than some costumes. Actually, I know it is. But I can’t watch all these rubber suits bounce around. I need some sort of human presence.

Now, I will say the cast was amazing, even if put in a really bad film. Horror fans will recognize a great many of these names: Michael Berryman (“The Hills Have Eyes”), Mark Hamill (“Silver Bullet”), David Gale (“Re-Animator”), Linnea Quigley (“Return of the Living Dead”), and Jeffrey Combs (“Re-Animator”). The film was even produced by Brian Yuzna, making this something of a “re-Animator” reunion. And the horror in-jokes were nice (casting Quigley as a scream queen, and Combs as “Doctor East”).

If the fight scenes had been cut shorter, this would have been a smoother and more enjoyable film. As it is now, it’s pretty bland and boring. Put it on for the kids, as I think they’ll get a lot more out of it. Then some day they’ll go back and watch it again, only to be traumatized that they used to like such rubbish. But looking back on what I used to like, I don’t know how I tolerated such poor animation as a child.