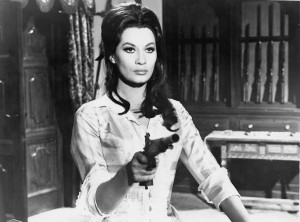 Ms. Neri who also went under the name of Sara Bay is 73 years old today, June 19th, 2012. If you went to the drive-in movies during the ‘60s, chances are you saw her many times. Among the 99 films in her filmography are 17 spaghetti westerns (A Long Ride To Hell), several Hercules movies (The Lion of Thebes), a number of horror films (Lady Frankenstein), and erotic softcore sexploitation films as well. Several of her films have developed a cult following, such as Slaughter Hotel where she played a kinky nymphomaniac in an insane asylum where a crazy Klaus Kinski is on the loose and killing the inmates. In another cult classic, Lady Frankenstein, she played the daughter of the doctor opposite Joseph Cotton. She did several films with American bodybuilder Steve Reeves of Hercules fame. She played the role of Farley Granger’s wife in another bizarre cult film, Amuck and the wife of Kurt Jurgens in Murder For Sale. In yet another strange cult horror film, The Devil’s Wedding Night, she played a sexy lesbian Lady Dracula. She played alongside Joan Collins in Esther and the King and she played a harem girl in the 1960s epic El Cid. Other famous actors with whom she co-starred include Ricard Egan, Alain Delon, Guy Madison, Mercedes McCambridge, Charleton Heston, Sophia Loren, Barbara Steele, and Herbert Lom.

Rosalba Neri was amazingly exotic and mesmerizing. She always played roles of powerful women, with a very strong and aggressive presence, even sinister and dangerous. She was a fine actress, with great charisma, usually dominating the screen in her low-budget films and was a graduate of Italy’s Center for Experimental Cinematography. She caught the eye of the New York stage at one point and was invited to join the exclusive membership of the prestigious Actor’s Studio founded by Elia Kazan which is considered the world’s best institute for method acting, an offer she declined for reasons unknown, preferring to stay in her native Italy.

When I was a kid seeing her films at the drive-in in the ‘60s, I was convinced she was the most beautiful woman on Earth. Here’s a clip (sorry for the grainy quality) of a strange scene from her film The Seducers with French actress Edwige Fenech and Eva Thulin, showing her phenomenal look, with the eyes of a predator, the eyes of a panther. She’s the brunette actress on the right at the beginning.