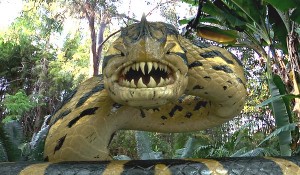 There’s a surprising amount of television this summer that threatens to be good for you: “The Newsroom” on HBO. “Michael Wood’s Story of England” on PBS. “N.Y. Med” on ABC. “Political Animals” on USA. You might as well still be in school.

Syfy
“Piranhaconda” on Syfy.
But not to worry — the careful viewer can still find disreputable entertainment in the summer listings. And I’m not talking about the soul-killing reality version, like “Snooki and JWoww” or “Bristol Palin: Life’s a Tripp,” which will both be inflicted on America next week.

No, this is trash with a sense of history. On Saturday night, the aficionado of B movies (we’re grading on a curve) has a delicious choice: a reimagining of a camp classic from the 1980s, “Blue Lagoon: The Awakening,” on Lifetime, or Syfy’s “Piranhaconda,” the latest gem from the schlockmeister Roger Corman’s production shop.

Of course, those with DVRs don’t need to choose. You can have your “sweeping tale of survival, adventure and forbidden love” and your “Part fish! Part snake! All killer!” too. If four hours of sandy castaway sex and giant man-eating fish-snakes sounds like too much of a good thing, though, here are some details that might help you decide.

“Blue Lagoon: The Awakening” is based on the same century-old romantic novel by Henry De Vere Stacpoole as the 1980 feature “The Blue Lagoon,” but the connection pretty much ends there. “The Blue Lagoon” put two young children on an island and gawked as they ran around naked and eventually figured out how to have sex. “The Awakening” puts a pair of wised-up teenagers on an island, waits for them to have sex and then rescues them just in time for a really awkward prom. Three months in the jungle may be tough, but it’s nothing compared with high school.

You wouldn’t expect anything different from a Lifetime movie. As you’d also expect, Brenton Thwaites and Indiana Evans, playing the castaway couple, show less skin than Christopher Atkins and Brooke Shields’s body double did on the big screen. (Mr. Atkins appears in the new film as a teacher; in keeping with Lifetime requirements, the cast is headlined by a female B-list star, Denise Richards, as the girl’s mother.)

Ms. Evans plays a nerdy, superorganized good girl who falls off a party boat during a school trip to Trinidad; Mr. Thwaites is the moody loner who jumps in to rescue her. Several large improbabilities later, they have washed up on a remote island, where they enact a teenage melodrama with the help of a monkey and a wildly out-of-place jungle cat.

Where Mr. Atkins’s Richard said to Ms. Shields’s Emmeline, “What would I ever do without my Em?,” Mr. Thwaites’s Dean says to Ms. Evans’s Emma: “We had sex once! We’re stuck on an island. We’re not soul mates!”

Besides gallantry, and what Emmeline called her “buppies,” the new film lacks the glowing cinematography of Néstor Almendros, who was nominated for an Oscar for “The Blue Lagoon.” But under the direction of Mikael Salomon and Jake Newsome, “The Awakening” offers occasional honest moments of humor and adolescent angst: Ms. Evans and Mr. Thwaites are in their early 20s and better actors than Ms. Shields and Mr. Atkins were in their teens.

Self-satirizing humor is the whole point of “Piranhaconda,” an amiable, unapologetically crude gigglefest directed by the Corman veteran Jim Wynorski, whose long résumé includes “Big Bad Mama II” and (under the name Salvadore Ross) “The Hills Have Thighs.” Things couldn’t be simpler: The beast of the title chows down on clueless vacationers, members of an island criminal gang, and the nubile cast and crew of an exploitation film called “Head Chopper 3,” while the victims say things like, “Why would anyone kidnap a low-budget-movie crew?” and “It’s like an unholy union between a piranha and an anaconda!”

In a rough-cut screener the digitally animated piranhaconda looks like a giant green sock puppet, but it moves with surprising smoothness and outperforms most of the human cast. As it hoovers up bad actors, displaying a particularly keen nose for breast implants, it’s hard not to root for the big lug. You particularly want it to get its fangs into Michael Madsen, sleepwalking through his role as a two-faced scientist, before its inevitable demise. No spoilers here.

Which of these Saturday-night flicks provides more guilty pleasure? Teenage girls may prefer “Blue Lagoon: The Awakening,” but the vote here is for the clunky humor and honest tawdriness of “Piranhaconda.” It’s what summer’s all about.