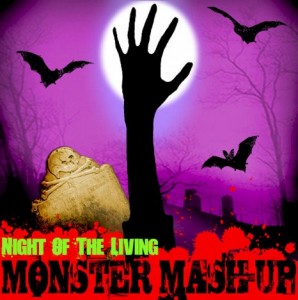 If you happen to see brain-seeking zombies, many-eyed monsters and lab-created terrors roaming around downtown Elgin this weekend, don’t be alarmed — it just means Elgin horror fans are celebrating the halfway mark until Halloween.

Friday and Saturday will witness the first Monster Mash-Up, a celebration of all things B-movie and horror, according to event coordinator Mitchell Wells.

What: Elgin’s Monster Mash Up, a horror-themed event by the organizers who created Nightmare on Chicago Street last fall

Details: Check out the Facebook page,
facebook.com/ElginMonsterMashUp
or call Horror Society at (773) 977-8140

While several horror films and short films will be screened, Wells said the two-day event much more than a film festival. The Haight building, 166 Symphony Way, Elgin will play host to about 20 vendors of horror merchandise, jewelry and art. Next door, visitors will get a taste of the Psychosis Haunted House, an interactive experience Wells said will liven up the crowd.

The two-day event has been in its planning stages since early 2012, Wells said, when he and two other horror fanatics were reminiscing about the success of last Halloween’s “Nightmare on Chicago Street” in Elgin. John LaFleur, who runs the website Dreary & Naughty; David Metzger, operator of the Wicked Whimsy Studio; and Wells, who runs the website Horror Society, privately funded the event to bring their love of the genre to a local audience.

“All three of us live this every day,” Wells said. “Anything to get what we love out to people to show them that we’re not all crazy. It’s such a cross section of people as well. I’ve met the most down-to-earth normal people that are huge horror fans.”

Though horror is a prevailing theme of the weekend, Wells said Saturday during the day will be family friendly, featuring more nostalgic classic monster B-movies. Wells also hopes families can get in on the costume contests, happening both days. Winners of the best zombie, best couple and best zombie hunter category will receive a prize.

Late Saturday afternoon will hold two of the weekend’s highlights: a dark magic show by razor blade-eating magician Dan Fitzgerald, and an actual zombie wedding. Schaumburg residents Erin Sistak and Nick Potsch will present their real-life, legal nuptials for all Mash-up goers — in theme, of course. Wells said the full procession will feature every ghoulish touch, including dead flowers.

“The public’s invited; the more the merrier,” Wells said. “We’d love to have everyone check this out. It’s going to be a spectacle.”

In between events during the weekend, horror fans can pop around the corner to Douglas Street Sports Bar at 231 Douglas. Mash-Up organizers have organized food and drink specials for festival visitors.

“There’s a lot of trials and tribulations that go into making an independent film,” he said. “I think the ones we picked this time are well made and well put together. Hopefully it will broaden peoples’ minds about independent film. It’s (the filmmakers’) passion so I want to get their love of film and love of horror out there to the crowd.”

For $2 on Friday night and $5 on Saturday, suburban Chicago’s horror-loving crowd can experience the “roller coaster ride” along with Wells and the rest of the Mash-Up team.

“I really dig the adrenaline rush you get from watching the films,” he said, likening the experience to an amusement-park ride. “I like being scared.”