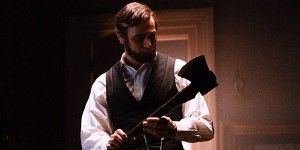 With set-pieces that include a vertiginous stand-off atop a perilous, flaming train, and The Battle of Gettysburg re-imagined with vampires thrown in for good measure, there’s no doubting that the absurdly-titled Abraham Lincoln: Vampire Hunter has all the makings of a gleefully silly B-movie. However, under the guidance of Wanted director Timur Bekmambetov, this adaptation of Seth Grahame-Smith’s acclaimed titular mashup novel suffers a fatal identity crisis, which undermines its strong visuals and solid performances.

In this piece of alternate history, Abraham Lincoln (Benjamin Walker) has lived a secret life as a vampire slayer since he was a young man. Under the tutelage of mysterious hunter Henry Sturges (Dominic Cooper), Lincoln battles the creatures of the night and hopes to one day vanquish Jack Barts (Marton Csokas), the vampire who killed his mother. In his later life, as President of the United States, he must defend his country against a vampire army intent on taking control.

There is one solitary, head-smackingly poor creative decision made here that pretty much ruins the entire film, and that is the choice to play it completely straight-faced as a serious work of speculative fiction. One look at the film’s title invites visions of a bearded, top-hat clad Lincoln spitting wise-cracks as he slays hordes of vamps, but alas, that is strangely not the film Bekmambetov is interested in making. Wit is nowhere to be found, and aside from the slick morsels of action – which become boring and repetitive rather quickly – there is very little sense of fun. It stands to reason that aiming for serious with material like this is a terrible idea, but they pushed ahead anyway, earmarking it as one of the year’s grossest misfires.

Simply, Abraham Lincoln: Vampire Hunter does not know what it wants to be. It wants silly action, but it also wants an emotive, character-driven plot, yet satisfies as neither. Lincoln’s marriage to Mary Todd (Mary Elizabeth Winstead) comes out of nowhere, and though his spouse is well-played by the lovely Winstead, the relationship dynamic feels completely rushed. Similarly, Bekmambetov goes through the motions with a tragic incident involving Lincoln’s son, but the tone winds up far too downcast for a film that moments later has the President wielding flying 3D axes. The characters are simply not developed enough to carry these inconsistencies through.

Various contrivances and inconsistencies then pile on top. The end-game solution is blindingly obvious from the first moment that Lincoln pours liquid silver onto his axe, yet it apparently takes him three decades to arrive at a conclusion that audiences will have twigged in five minutes. Furthermore, the vampires are bestowed with invisibility, yet only when it is convenient for the plot. The power established is one that cannot allow Lincoln to win, nor for the film to function logically – thus, the vamps nonsensically stand in plain sight for the majority of the film.

On the other hand, there are a few nice ideas, chiefly The Battle of Gettysburg fitted out with a vampire army, but what appears to be the climactic set-piece is given the short shrift in favour of mere money shots strewn between a fight atop a rickety train. Also, the ending, cleverly stoic in its reference to Lincoln’s eventual demise, is the only moment that ratchets the postmodernity up to eleven and gets things to where they should be.

For better and (mostly) for worse, the film fulfills most of the expectations of a Timur Bekmambetov flick – it is visually impressive, enthusiastically dispenses with the laws of physics, and is completely underwhelming. Most of all, it’s a shame for the actors, who try hard with what they have but are mostly helpless.

The appallingly self-serious Abraham Lincoln: Vampire Hunter is stylised to death and lacks the subversion needed to support its inspired premise.