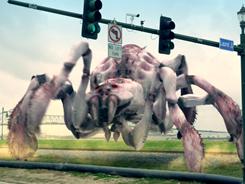 Toss pop-culture mainstays like Danny Bonaduce, Edward Furlong and Joey Fatone into a vat loaded with giant spiders, Bigfoot, killer sharks and a piranha-anaconda hybrid. The result: the summer batch of Syfy channel Saturday Original Movies packed with blood, guts, horror and a lot of laughs.

The cable channel known for science fiction, fantasy, paranormal and adventure programming has cranked out more than 230 original movies since 2002. This year, those broadcasts have averaged nearly 2 million viewers, up 5% over 2011.
Four new classics for June (two have already aired but will repeat in July):
•Jersey Shore Shark Attack, a snarky nod to Jersey Shore with Melissa Molinaro as a character named Nooki, and Jeremy Luc as “The Complication.” Jersey Shore’s Vinny Guadagnino even has a small role, as does former ‘N Sync-er Fatone. Plot, for what it’s worth, concerns angry sharks over the July 4th weekend, dining on residents of Seaside Heights, the Jersey beach town best known as the home to the MTV show that stars Snooki and The Situation.
•Piranhaconda, from B-movie icon Roger Corman (who has also contributed Sharktopus), revolves around a half-fish/half-snake that terrorizes a movie crew shooting on an island. It stars Teri Ivens (All My Children) and Michael Madsen (Kill Bill 1 & 2).
•Arachnoquake, in which beleaguered New Orleans is now terrorized by giant spiders unleashed by earthquakes, starring Tracey Gold (Growing Pains) and Furlong (Terminator 2: Judgment Day). Airs Saturday.

What do you get when you combine an earthquake and giant spiders? Syfy’s ‘Arachnoquake,’ which premieres Saturday.
•Bigfoot, starring Bonaduce (The Partridge Family) and Barry Williams (The Brady Bunch). Airs June 30.
“We’ve put together four fun movies in a row,” says Syfy original movies chief Thomas Vitale. “It’s June. It’s escapist popcorn fare. They’re the kind of movies that are released theatrically in the summer — the big, special-effects-driven movies to give you an emotional release.”
They may mix fun and fear, but “their production is taken very seriously,” says Ken Badish of Active Entertainment, which produced Arachnoquake and past Syfy originals Swamp Shark and SwampVolcano. “We’re able to do so much more even on a relatively lower budget than we could a few years ago.”
Badish says technological advancements have enhanced filmmakers’ ability to add higher-quality CGI for less. “We have the ability to deliver production values that are comparable to studio films because we’re using the same cameras, the same lenses, the same (executive producers) and crews. We’re able to make better B-movies.”
And the actors appreciate the benefits of mixing horror with hoke, and are quick to joke about it.
“I had one condition, and that was that I could beat the heck out of Danny Bonaduce at some point in the movie,” says Williams, best known for playing squeaky clean Greg Brady. (In a 2002 match on Fox’s Celebrity Boxing, Bonaduce, who played the mischief-making Danny Partridge, bested him.)
Williams knows that casting him and Bonaduce is a publicity stunt with the potential to draw curious fans of these vintage ’70s shows. “When you team Barry Williams and Danny Bonaduce in a movie, that’s inescapable,” he says.
Bonaduce shares the sentiment. “If you took The Partridge Family-Brady Bunch quantum out of this, you’d have yourself a pretty good sci-fi movie about Bigfoot. It’s just that big numbers (of viewers) are going to be coming because of Greg Brady vs. Danny Partridge going after Bigfoot. Otherwise, you’d just have the Bigfoot cult and the sci-fi cult.”
That broad appeal, says Vitale, makes these movies more promotable and gives them a higher media profile. “It’s more important than ever to be talked about right now.” “Syfy” and “Joey Fatone,” for example, were among top trending topics on Twitter while Jersey Shore Shark Attack was airing.
In the run-up to Halloween, Syfy will offer darker original movies this fall, including American Horror House, with Morgan Fairchild and Alessandra Torresani, and Dead Walking, with LeVar Burton and Mariel Hemingway.