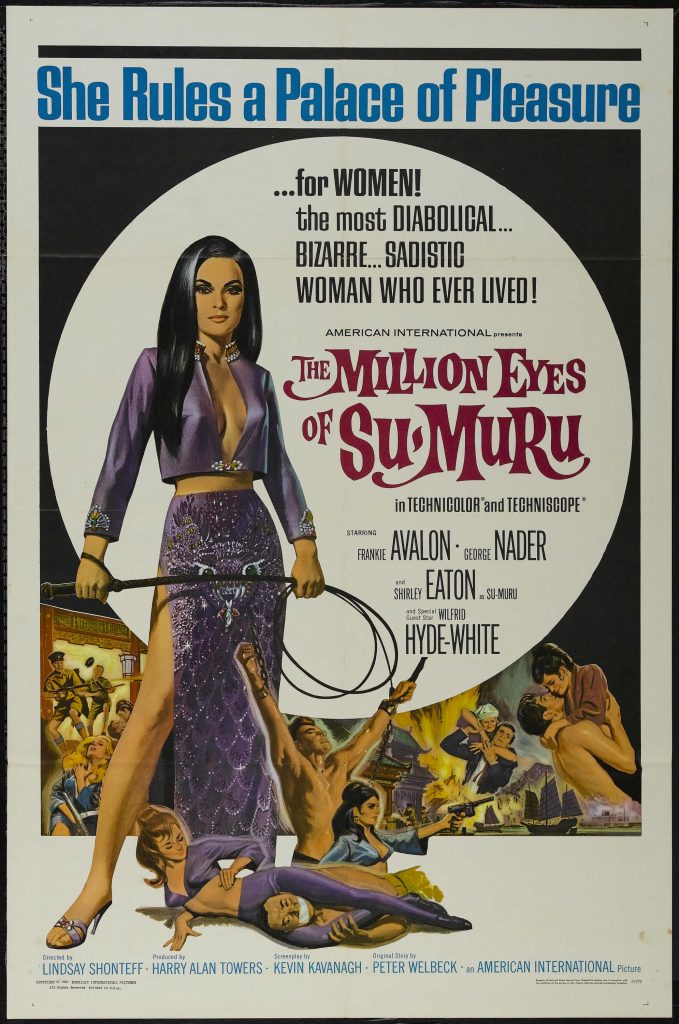 The Million Eyes of Sumuru is another movie produced by exploitation maven Harry Alan Towers. Like quite a few of his others it has a unique combination of low budget with exotic location shooting. In this case the action takes place in Hong Kong. The title character is Sumuru (essentially a female Fu Manchu) who plans on ruling the world by using her army of gorgeous women who go out individually and kill all of the world’s leading men after getting up close and personal with them by way of their considerable female charms. These ‘unfortunate’ male saps are then dispatched by a device that turns them into stone. Anyway, via this grand plan Sumuru will take over the world somehow.

This is one of the films that surfed the wave of success created by the James Bond movies which were massive in the 60’s. To that end it has a very agreeable combination of exotic locations and hot premier division women. The very fact that the plot-line to this one actively focuses on a woman with an army of babes meant that this one got plus points from me more or less straight away. The 60’s glamour essentially is what makes this one work for me. From the thrills and spills side of the fence it’s pretty half-hearted, this is a film after all which could be summed up with the word ‘breezy’, so it’s best not to go into this one expecting any pulse pounding action.

The star of the piece is Shirley Eaton in the role of Sumuru. She would go on to forever be known as the lady painted gold in the earlier Bond classic Goldfinger (1964) but it’s nice to see her get a starring role here (she also repeated the role in the follow up movie The Girl from Rio (1969), which is another poorly rated film which I happen to like a lot more than most others it seems). This one also benefits from the appearance of two other cult film stars in the beautiful Maria Rohm as a female agent (who is ‘turned’ by the main ‘hero’ who was not much more than a sex-pest I thought) and we also have Klaus Kinski appear as one of the high ranking men who is targeted by Sumuru, he even gets to sport a very silly wig in the process. On the whole, this is a movie which seems to have something of a bad reputation which I personally think is somewhat unfair. It has beautiful women, exotic locations and breezy action. That might not be enough for some but it was enough for me.