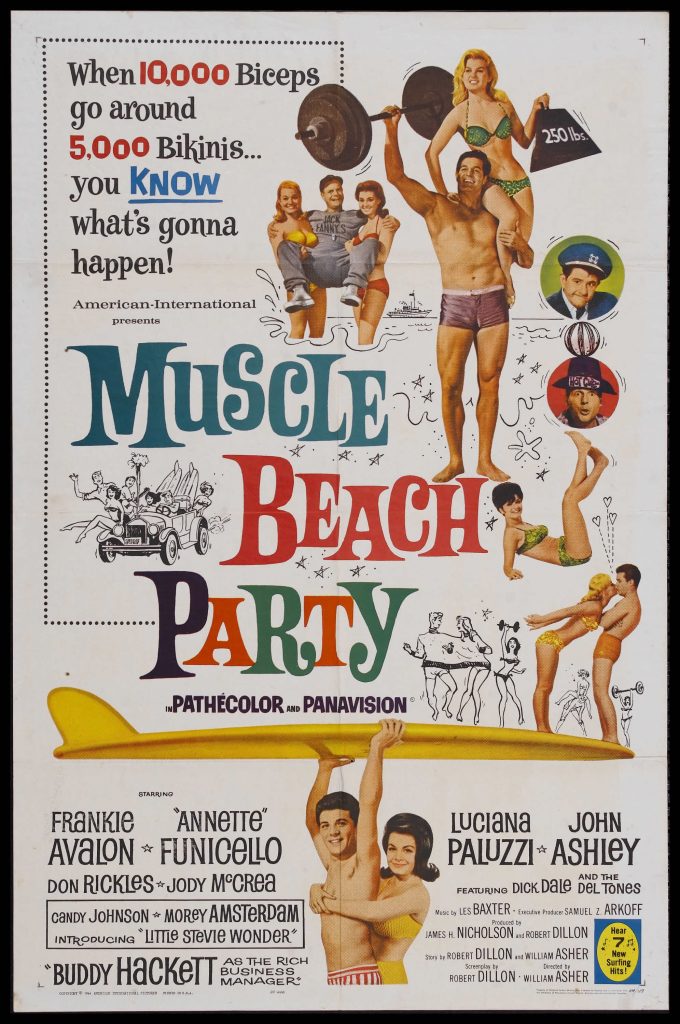 Despite lots of musclemen in the supporting cast, “Muscle Beach Party” could maybe use some steroids. The first follow-up to “Beach Party” is a bit lackluster and talky, and the pacing drags. Frankie (Frankie Avalon) and Dee Dee (Annette Funicello, no longer ‘Dolores’) feud over another woman who’s out to snare the cocky surfer-boy (when Dee Dee tells Frankie how selfish he is and that all he ever does is ‘take’, the movie touches on some surprisingly prickly teen emotions). But the witty lines and funny repartee of “Beach Party” have mostly been replaced by wan slapstick and too many characters (and too much of Don Rickles). Candy Johnson does her version of dancing (“Man, she’s really got the power!”), “Little” Stevie Wonder sings “Happy Street”, and the surfing footage is fun, but Harvey Lembeck’s Eric Von Zipper is AWOL (there wasn’t room for him, what with Luciana Paluzzi as a millionairess, Buddy Hackett as her manager, and a dozen musclemen lining the beach). Annette is lovely singing forlornly as Frankie paddles out to sea, but she’s far too patient with him (in one scene alone, he makes up with her, then drops her, then makes up again!). Not the strongest entry in the series, but with a few colorful compensations.