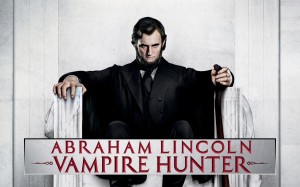 When faced with a tone-deaf would-be fanboy film, it’s hard not to think about Elizabeth Kubler-Ross.

The woman who popularized the “five stages of dying” was also right on the money in describing all that went through my mind during last night’s screening of “Abraham Lincoln: Vampire Hunter.”

First came denial (“No, this is just a subversive B-movie romp!”) then anger (“I’m gonna to go Russia and make a dumbass movie about Peter the Great and see how Timur Bekmanbetov feels!”) then bargaining (“Please! Someone go get John Wilkes Booth on my ass and put me out of my misery right now!”) then depression (“This is my fault for forwarding all those Funny or Die videos”) and finally acceptance (“Okay, I guess the fight with Marton Csokas with the stampeding horses was kinda cool.”)

With these five stages flushed through my system, I found myself asking one more: just how much of this is actually … accurate?

Now, I’m no presidential historian but I’m pretty sure that some of the stuff that wasn’t supposed to be, you know, a joke, didn’t actually happen. Here is a tip sheet you may want to study before you raise your hand in class and say something dumb. As Honest Abe is said to have said, “it is better to be thought a fool than to open one’s mouth and remove all doubt. And pass the garlic.”

Abraham Lincoln knew how to use an axe: True. He worked as a rail splitter which means he probably really could kill all of us with his bare hands.

20th Century Fox
Abraham Lincoln had a BFF named Joshua Speed and lived in his General Store in Springfield: True. He never officially worked in the store, but, yeah, maybe he helped move boxes once in a while, so the “meet cute” with Mary Todd isn’t that far-fetched.

Joshua Speed came with Lincoln to Washington and worked as his advisor: False, however his brother James Speed was Lincoln’s Attorney General. Furthermore Joshua Speed never colluded with vampires.

Okay, well, that other Speed, James. James Speed colluded with vampires: False, but not as false as you might think! James Speed attended (wait for it) Transylvania University!!!!

There was a black person named Willie Johnson in Abraham Lincoln’s life: True. He shined Abe Lincoln’s shoes, cut his hair and carried his bags. He traveled with him to Gettysburg where he caught smallpox and died. (The President paid for his funeral expenses.)

Mary Todd Lincoln shotgun blasted the Vampiress who murdered her son in badass slow-motion: False. The death of her son William Wallace Lincoln was an emotional blow from which the already psychologically unstable woman almost didn’t recover. Don’t we all feel horrible for turning this into a cheap story beat now?

The Union war department collected silver and shipped it down to the front for its vampire-slaying properties: False. It collected Irish.

Abraham Lincoln bravely stood up against slavery: True. Dude’s a hero. They should be making movies about him.

Abraham Lincoln instigated the Civil War to flush vampires out of the south, who were working in collusion with Jefferson Davies and feasting on black people: False. You’re an idiot.

You are taking this all too personally. You should just be having fun with a B-movie: False. I’d love an energetic, campy “tall tale” movie mixing stuffy American history and cool vampires. This movie is not that.

Abraham Lincoln’s Treasurer had a crazy-ass name: True. His name was Salmon P. Chase. This isn’t in the movie, but I thought you’d like to know.

Come back every Thursday for more intergalactic musings on Planet Fanboy and follow its fearless leader Jordan Hoffman on Twitter!