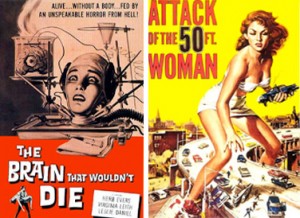 B-movies were a by-product of the block booking system, when Hollywood required theaters to purchase a secondary feature if those theaters wanted to present the A-movie. Over time, the term has come to be associated with any low-quality film with substandard production values.

Although universally panned, many B-movies have qualities that sometimes lift them to the level of genius. And that curious journey that takes them from abysmal to admirable is followed in one of UB’s summer course offerings.

Sarah JM Kolberg’s class in B-movies (DSM 455) is offered online. It attracts not only UB students, but others from around the country: Last year, a student from China enrolled. The group may not share a common geography, yet everyone in the class, including its instructor, has enthusiasm for the genre and embraces the campiness of the Bs.

“I was always an insomniac,” says Kolberg, an adjunct instructor in the Department of Media Study and a PhD candidate in visual studies at UB. “Sleepless nights led me to late-night television and B-movies.”

In addition to her academic credentials, Kolberg is on the production team of “Off Beat Cinema,” a nationally syndicated program that is produced locally by WKBW Channel 7. For 19 years, to the delight of its viewers, the show has presented some of the worst movies ever made.

Kolberg says she was always drawn to these cheesy films, amused by their artifice. But she soon realized that there was more to B-movies than surface fluff populated by monsters, aliens and outlaws.

“As I continued watching these films, I began to look at them theoretically,” she says. “That investigation is what this class tries to unpack.”

The class, in fact, is built on a theoretical base. In addition to analyzing films such as “Earth vs. The Spider” and “The Brain that Wouldn’t Die,” students also read selections from Sigmund Freud and Susan Sontag.

“Some of my students come to the class because they love B-movies but have never looked at them from an intellectual perspective,” she says.

Low-budget Hollywood might seem an unlikely place to discover any cultural significance. But many of the B-movies, particularly the science-fiction films, were well-attuned to societal anxieties associated with the day’s scientific advancements.

“Look at all the films that arose around nuclear-technology concernsâ€”the big bug movies of the 1950s,” says Kolberg. “These were all tied into Promethean themes of things run amok because humanity was tampering with things that it shouldn’t have been tampering with.”

B-movies may not have generated a significant cash flow for studios, but they were easy money. Few resources were dedicated to these productions, which were characterized by their hastily written scripts, recycled sets and tight budgets.

“Many of these films were made in seven days,” notes Kolberg. “The most commonly cited example of this—and of a great film that was made in only six days—is Edgar Ulmer’s noir classic ‘Detour.’”

It’s assumed that Ulmer rested on the seventh day, yet idle moments were rare for B-movie directors, whose creativity often was inspired by the economic constraints of their genre.

“The apartment in Orson Welles’ ‘The Magnificent Ambersons’ is the same set used in ‘Cat People,’” Kolberg explains. “But that fact is not immediately evident to viewers because of how the scenes were shot.”

Other pioneering B-movie techniques include the use of stock footage, a practice still used today—even in blockbuster films.

The films, however, provide lessons beyond the resourcefulness of their directors, according to Kolberg.

“They are rich in their metaphoric and symbolic exploration. And they present in simultaneous complex and simple ways some of the deepest concerns we have as humans,” she says. “The metaphoric representation of ‘the other,’ the monster or the immigrant, we don’t yet know. All of these issues play together.”

Once students learn how to interpret these symbolic representations, Kolberg says, they can apply the techniques to any movie.

“’Robot Monster’ features a guy in a gorilla suit wearing a diving bell. There is no attempt to cover the fact that it’s a cheesy costume,” says Kolberg. “But a big-budget, modern-day thriller such as ‘Alien’ is a film that contains the same themes and issues.