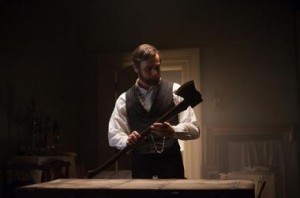 Well, at least nobody’s going to wander into “Abraham Lincoln: Vampire Hunter” wondering what they’re getting into.
Really, too many movies hide behind meaningless come-ons. Who, exactly, are these “People Like Us”? What is “The Magic of Belle Isle”? You can’t tell the tales from the titles, and that’s how the studios want it.
But exploitation movies — “Snakes on a Plane,” “Hobo With a Shotgun” — are made of sterner stuff. They tell you what they’re going to give you, and then they do.
Except what “Abraham Lincoln: Vampire Hunter” mostly delivers is a long, ugly march through bad CGI, dull acting and dreadful writing.
The story begins with the death of young Abraham’s mother — to a vampire, it seems. (It’s part of the story’s re-jiggered mythos that only sinful victims seem to join their undead attackers; good people simply die.) So, once he comes of age, Abe goes in search of vengeance.
But he soon meets a truly skilled vampire hunter. And he learns to go in search of justice instead — a widened quest that eventually leads him into politics, and then the presidency, to fight a vampiric horde that has infected most of the South.
This is all nonsense, obviously, but it’s rather garishly colorful nonsense. (I can imagine a campy prequel about James Buchanan, chastely fleeing the embraces of villainous succubae.) It could be fun, if the filmmakers had fun with it.
Instead — and this may be the only joke in the whole picture — they actually take it seriously.
It’s not just the dully earnest performances. (Star Benjamin Walker bragged that he prepared by reading several biographies of Lincoln; he would have better spent his time watching Hammer movies.) It’s the pallid palette, the pasted-on chin whiskers, the flat dialogue.

Walker, who may be best known for his stage work in the revisionist “Bloody Bloody Andrew Jackson” — I guess a Rutherford B. Hayes sitcom is next — has no charisma as Lincoln, even when he’s giving the Gettysburg Address. Dominic Cooper and Rufus Sewell are mere cutouts as friends and enemies.
The movie doesn’t even look good. Director Timur Bekmambetov is a mad visualist best known for the import vampire films “Night Watch” and “Day Watch”; he also made the wild if incomprehensible “Wanted,” with Angelina Jolie taking baths in warm wax.
But he’s run out of ideas here. The first time he has a fanged vampire lunge at the 3-D camera, it’s a cheap but effective trick; by the fifth time, it’s an annoyance. And the poor CGI adds only the most unwelcome kind of unreality, in which animated armies clash by night.
It’s a shame because a livelier director — say an in-his-prime John Carpenter — would have found the nasty bad-taste jolt to this story. The politics, too; the idea of parasitical plantation owners as literal bloodsuckers is a juicy one the movie fails to exploit. And exploiting juicy ideas is sort of what exploitation movies are supposed to do.
Instead, what we get is a B movie treated like an A movie that mostly ends up being a zzzzzzzzzz movie.
Although it has one good line, toward the end. “Abe!” the nagging Mary Todd shouts. “We’re going to be late for the theater!”
And off the Great Emancipator rides for his tragic date with destiny.
But hey, it could be worse. He could have been going to see this.
Ratings note: The film contains gory violence, nudity and sexual situations