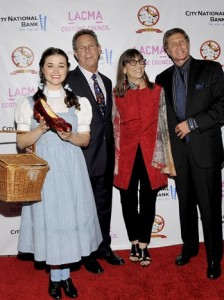 OK, it was just the costumes these actors had worn in iconic films such as Thief of Bagdad, Gone With the Wind, Patton and Cleopatra. Along with Pitt’s ensemble from The Assassination of Jesse James, Crowe’s 3:10 to Yuma and Damon’s from True Grit. But it was still pretty darned exciting for a room packed with costume designers, fashionistas and others involved in behind-the-scenes film production.
PHOTOS: Western Costume’s 100-Year Celebration at LACMA
All these reproductions were copies of the actual costumes made at Western over the years, and they were worn onstage for a lavish costume show featuring models, actors and even fun-loving Western employees. The event was presented by LACMA’s Costume Council and sponsored by City National Bank.
Western president Eddie Marks was on the panel including costume designers Ellen Mirojnick (Chaplin, Wall Street), Carol Ramsey (Magic City, Mr. and Mrs Bridges), costume supervisor Jim Tyson (The Right Stuff, Thor), world famous milliner Harry Rotz (Hunger Games, Changeling) and shoemaker to the stars Mauricio Osaro (True Grit, Captain America). And, of course, the incomparable research library director Bobi Garland moderated the panel.
The panel talked about the beginnings of the costume house, established in 1912, by L.L. Burns and Harry Revier, who launched a stage, prop and costume shop for the fledgling motion picture industry. Renamed Western Costume Co., the operation is now one of the largest costume houses in the world and has bragging rights to Dorothy’s (Judy Garland) ruby slippers from The Wizard of Oz and Leigh’s dresses and Gable’s suits for Gone With the Wind as well providing costumes for Cecil B. DeMille’s 1914 The Squaw Man up to U.S forces’ Afghanistan military gear for Kathryn Bigelow’s new Osama Bin Laden movie, Zero Dark Thirty. due out next year.
Clothes from Western’s immense period stock are already being pulled for the upcoming film Butler, about Eugene Allen, the White House butler for eight presidents. The film is reportedly starring Forest Whitaker, Oprah Winfrey, Cuba Gooding Jr. and Jane Fonda (as Nancy Reagan). The second Hunger Games costume work is due to crank up soon at the company’s North Hollywood warehouse.
The panel also discussed Western’s move to a 120,000-square-foot North Hollywood warehouse that once housed printing presses for the Los Angeles Times magazine. There are more than seven miles of metal pipe clothing racks of costumes (meticulously organized by era, type, genre, etc.) as well exhaustive research departments, international sourcing departments for fabrics or what-have-you, a vintage fabric department and a store selling everything needed to clean (or age and destroy) costumes as well as a haute couture millinery department, luxury shoe department, dying and distressing areas as well as office space for costume designers private fittings with their stars.
Costume designers such as Mad Men’s Janie Bryant; Magic City’s Ramsey; Deborah Hopper, who has done the costumes for all of Clint Eastwood’s films; and Mary Zophres, who has worked on the Coen brothers’ films, including No Country for Old Men and O Brother, Where Are Thou?, True Grit, A Serious Man and Burn After Reading have all relied on Western. Julie Weiss, who has been working at Western Costume for decades, recently operated out of their facility for her work on the ’50s-era fil, Hitchcock, about the making of Psycho.
She recalls the early years and notes the advances in the costume house’s stock, production and services, explaining that one of the secrets of Western’s success is that everyone working there loves (lives and breathes) the magic of costume design.
It was obvious Wednesday night that the Western folks still get as excited as little kids when it comes to the transformational and emotional power of costumes. After the wildly applauded costume show, costume designer Mary Zophres proudly hopped on the red carpet with the young man modeling her Matt Damon True Grit get-up. “I made this!” she exclaimed.
For many months, the folks at Western have been spending any free time they had (some until 4 a.m. Wednesday) making replicas of of their iconic pieces: Taylor’s Cleopatra gown, George C. Scott’s Patton uniform, Dorothy’s ruby slippers and Laurel and Hardy’s suits, up to Mark Bridges’s costumes from last year’s Oscar-winning film The Artist
A big hit last night was Scarlett O’Hara’s green velvet “curtains” gown. The Hollywood Reporter was finishing up a tour of Western Costume last week when the dyed green velvet fabric was presented to Marks for his approval. “Too bright. Let’s take it down a notch,” he suggested.
Then the transformation plans for a mysterious rubber chicken leg were discussed, something involving brown dye and gold paint. Last night, the chicken foot made its big appearance, firmly festooned on Miss Scarlet’s jaunty green velvet cap.