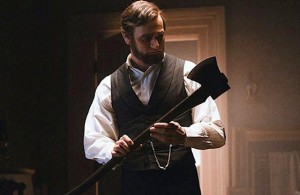 With its own punch line making up the composition of its very title, “Abraham Lincoln: Vampire Hunter” makes no pretentions of even trying to be anything more than a schlocky B-movie. The success of such films however, rides on the cast and production crew’s earnest effort to respect their material while remaining consistently visually inventive. While “Abraham Lincoln: Vampire Hunter” delivery through a straight face can cause dragging at times, the final result, if nothing else, is a respectable attempt at a direct-to-video B-movie with a budget.
The film tells the “secret” history of American President Abraham Lincoln and his rise to power, culminating in the true cause behind the Civil War. As pointed out by the title, that cause is vampires. “Abraham Lincoln: Vampire Hunter” plays around with key aspects of Lincoln’s life, such as the deaths of certain family members being brought on by vampirism, in order to create a superhero origin for the famous President that freed the slaves, tying American history into a secret war with the bloodsucking undead. Lincoln himself is portrayed by Benjamin Walker, who is trained in the art of slaying the undead by the fictional Henry Sturges –played by Dominic Cooper– after plotting from his late childhood to murder the vampire that killed his mother.
Once the stars of the film take to the screen, the film quickly reveals its refusal to plant its tongue in its cheek. Similarly to the recently released “Snow White and the Huntsman,” “Abraham Lincoln: Vampire Hunter” plays out its premise almost entirely with a straight face. Unlike “Snow White” however, “Abraham Lincoln: Vampire Hunter’s” earnest attempt at taking its completely silly premise seriously gives the film an unintentional charm similar to that of the better Syfy Channel original movies.
Every performance in this film is so straight and serious that the movie is a content change and a minor shift in tone away from being an actual Abraham Lincoln biopic. Cooper provides the sole source of charisma of the entire film, playing excellently off of Walker’s straight man rendition of Lincoln. Although the cast turns in decent performances, the movie is by no means an actor’s showcase. Despite doing what was asked of them by the material there are a lot of moments in “Abraham Lincoln: Vampire Hunter” in which the cast can come off as just plain wooden. The actors deliver their dialogue with just enough conviction to be passable but not enough to hide that they are performing in a pretty poorly written movie.
Fortunately for “Abraham Lincoln: Vampire Hunter,” the movie is sold on its style over substance and despite a few noticeable hiccups, this is where the movie succeeds. Although it relies on the speed up, slow motion technique in ways reminiscent of Zack Snyder films and the entire first half could have been significantly trimmed for a tighter final product, the film is at its most fun when playing with the Lincoln’s history. Weaving the mythology into his life and even seeing him in action with his ax are where the heart of the film lies. I must give further praise to the cinematographers, whose usage of colors and excellent camera work towards the last half make for the best set pieces of the entire film. The movie slowed down to a fault plenty of times but I could never recall being truly bored in the theater.
Despite the entertainment value of “Abraham Lincoln: Vampire Hunter” however, I can’t help but think that even with its high budget, this probably would have worked better in home media than a theatrical release. As somebody who weekly researches, seeks out, and even makes parties of watching B-movies, this film is more or less on par with the higher quality direct to video releases that I regularly watch. I won’t deny that I liked this movie at all but I’m still grappling with the concept of recommending a theatrical viewing of a film that is no better than other movies that are never even considered for theatrical distribution.
This isn’t a very tough nut to crack. If you looked at the title for this film and scoffed at its silliness, then by all means avoid it like the plague because the actual movie will not change your mind. If you actually have an interest in seeing it however, you may not be disappointed paying a matinee to watch it in theaters, although I personally would have preferred watching it as a rental in my living room, surrounded by my friends and a couple of drinks on hand as it was probably meant to be viewed.