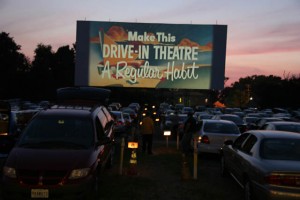 On a typical weekend night in the summer, the line of cars waiting to enter the Bengies Drive-In Theatre backs onto Eastern Boulevard, patrons hit up the snack bar and, as dusk turns to dark, owner D. Edward Vogel reels off the theater’s many rules before starting the evening’s first feature.

But the outcome of a trial this week could put the Baltimore area’s last drive-in movie theater at risk.

A lawsuit pitting Bengies against a neighboring Royal Farms convenience store and its outdoor lights is being argued before a Baltimore County Circuit Court jury this week. If the lights are not ordered removed, or at least toned down, Vogel said in an interview, he could be forced to shut down.

“If the lights are allowed to remain — it becomes a business decision, to say to myself, ‘I can’t get protection from Baltimore County. I can’t win against these lights,'” said Vogel, who contends that the Royal Farms lights interfere with the view from at least two-thirds of Bengies’ 750 parking spaces. “So the natural conclusion is: The drive-in cannot exist in this location.”

The Royal Farms lights are visible from certain sections of the drive-in. A vocal advocate for the business his family started in 1956, Vogel has long argued that the lights disturb his customers. They delay his annual opening by several weeks — until nearby trees are in full bloom and can act as a barrier — and have thwarted his plans to add a second screen, he said.

“The light is a distraction to the patrons,” said T. Wray McCurdy, an attorney representing the theater. “Even though they’re not necessarily watching the light instead of the movie, when the light is in your peripheral view — and, according to our experts, it could be 10 times brighter than the movie — it detracts from the viewing experience. People are less likely to come out. And, frankly, there are better environments to watch a movie in than that.”

Royal Farms, however, counters that the store is in compliance with Baltimore County laws. In fact, attorney Alan A. Abramowitz said, Royal Farms has gone beyond what the law requires, including removing lights shining on the building’s cupola.

The lighting dispute goes back to at least 2003, when county Zoning Hearing Officer Lawrence E. Schmidt granted a special exception allowing construction on the site where the Royal Farms now stands. In his ruling, however, Schmidt said that buffers and light controls would need to be installed, perhaps more than the county code requires, because of the site’s location across Eastern Boulevard from the drive-in.

Six years later, a new zoning hearing officer allowed Royal Farms to install additional signs on the property and took issue with Vogel’s claims that the store’s lights interfered with his business. County zoning officials have consistently said that the store is in compliance with department regulations.

In January 2010, Vogel took the county to court. The lights, he argued, violated the 2003 special-exception ruling and thus the county should force Royal Farms to remove them. The judge, though sympathetic to Vogel’s argument, said she had no authority to force the county’s hand.

The civil suit being argued this week seeks $750,000 from Royal Farms, for construction of a wall to run along Eastern Boulevard between the store and the theater property, and $306,000 for lost business from not being able to add the second screen Vogel had planned, McCurdy said.

Abramowitz scoffed at the wall argument.

“This sound and light barrier that they want to erect is the kind of barrier that surrounds [portions of] the Beltway,” he said. “And they want it to run almost 800 feet, whereas the Farms Store is opposite their property for about 70 feet. We do not believe that a request from the drive-in to install such a fence should be at Royal Farms’ expense.”

Outside of the lights themselves, Vogel said he worries about the precedent that could be set if the lights remain undimmed. Other than Royal Farms, he said, surrounding businesses have been accommodating, positioning or shielding their lights so as not to affect the 56-year-old drive-in.