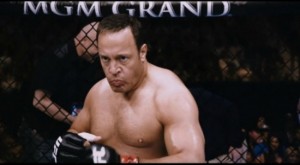 Check out the trailer above.

The longtime funnyman and avid MMA enthusiast stars as a high school teacher turned professional cage fighter in order to raise enough money to save the school from $48,000 worth of budget cuts. James is joined by a star-studded cast featuring Salma Hayek, Melissa Peterman and Henry Winkler.

Many well-known fighters and MMA personalities also make cameos in the film, such as Krzysztof Soszynski, Bas Rutten, Joe Rogan and a green-haired Jason “Mayhem” Miller. Even the UFC’s trademarked gloves make an appearance.

Here Comes the Boom is directed by Frank Coraci, who has directed many comedic hits including The Waterboy, The Wedding Singer and Click.

Coraci previously worked with James on the 2011 family comedy Zookeeper, which coincidentally also featured a cameo appearance by Rogan.

Here Comes the Boom is set to be released in theaters on October 10.